He Chaucer lacks the high seriousness of the great classics, and therewith an important part of their virtue.-- Matthew Arnold.


I seem to be one of the few people in the country who didn't like THOR: RAGNAROK, and found its over-dependence on jokes to be an indicator of how little the show-runners "got" the character.  However, the more I think about it, the failings of RAGNAROK may indicate even more about the problems of the Marvel Cinematic Universe, as put forth by the fellow most associated with its success, studio chief Kevin Feige.

I say this with the full knowledge that Feige's version of "the Marvel Universe" is not likely to be surpassed within my lifetime. Feige clearly gets some of the key elements that made 1960s Marvel a success. Had there been no Marvel, it seems unlikely that (1) fans would have been motivated enough to create the direct market, and thus (2) mainstream comic books probably would not have survived their distributor problems of the 1970s.

Feige has reportedly called himself a "fanboy," and almost all of his cinematic credits support this assertion. Prior to 2008's IRON MAN, Feige worked in a production capacity on fourteen films, all based on superhero characters. In time he may be seen as being every bit as influential as Jim Shooter in promoting Marvel as a "superhero-first" company. And in some ways, Feige "got' Marvel better than Shooter. Feige understands three major aspects of Marvel's "Silver-Age" success;

Stan Lee, as editor of the Marvel Line, probably had no aim beyond cross-promotion whenever he had Spider-Man try to join the Fantastic Four and the like. However, as time went on, he apparently found that continuity was not only popular with readers, it was a useful tool for a writer. For instance, in 1964's AVENGERS #4, he and Kirby whipped up a villain, Baron Zemo, who used a super-glue against two of the heroes, Giant-Man and Captain America.

How to get out of it? Well, you have the Avengers consult another expert on glue, the Human Torch's foe Paste-Pot Pete (whose face Kirby apparently forgot, making him look rather like his sometime partner the Wizard).

More importantly for the MCU, Lee also found a lot of material simply in having heroes from different milieus, and with different speech-patterns. Here's Daredevil trying to prove his "mad skills" to a certain thunder-god. 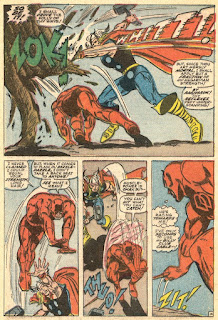 Whereas a lot of writers would have written the two characters indistinguishably, Lee understood that a thunder-god wasn't going to talk the same as a modern superhero. This discovery also led to another aspect of Lee's approach:

For Stan Lee, this was clearly another device to draw readers into the fictional worlds of the Marvel characters, so that they would buy each and every issue of a given series, rather than just picking up random issues according to chance. But there's every indication that Lee himself became invested in the characters, as when he decided that he wanted to lay near-exclusive claim to chronicling the adventures of the Silver Surfer when the character graduated to his own series. I can't be positive that there might not have been some hard-boiled business decision behind Lee's claim, since he'd publicly admitted that Jack Kirby alone created the character. However, Lee definitely attempted some things he never attempted in other Marvel features, such as making his main character a Christ-figure. 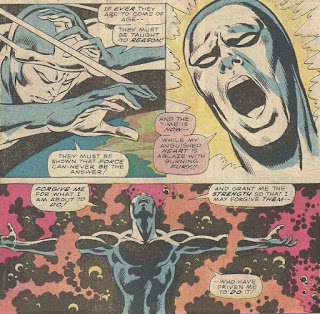 (3) The Prevalence of Humor.

Of these three aspects of Marvel's success, this is clearly the one that Kevin Feige most emulates. Long before the rise of Marvel Comics, Lee's writing demonstrated an ability for "snappy patter" in humor comics like TESSIE THE TYPIST and MY FRIEND IRMA, and in many ways he simply translated that talent to the 1960s superhero books. However, he also made much of the humor flow from character, which had generally not been the rule for the superhero genre. Most of the Marvel features of the Silver Age were replete with a jazzy sense of humor, and even the more "serious" titles, like the aforementioned THOR, allowed for moments of whimsy, as seen with characters like "Volstagg the Magnificent." 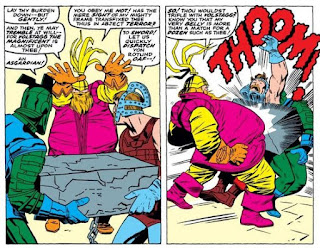 Ironically, SILVER SURFER was possibly the only Lee-written title that boasted no humor of consequence, which may have contributed to the feature's early demise.


I believe that no fans familiar with Silver Age Marvel would dispute these three aspects as major factors in the Marvel success,but I think there's a fourth one that usually goes unacknowledged, and that is Lee's flirtations with what Arnold, in the quote above, called "high seriousness."

What Arnold meant by the phrase doesn't matter to me here, since the phrase has taken on a life of its own. In general it connotes a sense of gravitas, and is almost always applied to works of literary merit. At the time Lee made his first breakthroughs with Marvel, it's a given that the forty-something editor had no illusions about the status of comic books, no matter what he may have said later in his "bullpen bulletins." He knew that they were deemed lowbrow entertainment, and that any efforts he made to "elevate the form"-- like SILVER SURFER-- were aimed to impress fan-readers who wanted something a little different with their superhero action.

But even though Lee probably knew that he'd never be "taken seriously," he showed a talent for scenes of faux high seriousness, even within a lowbrow context. For instance, here's Thor facing the death-goddess Hela from the Mangog saga I analyzed here. 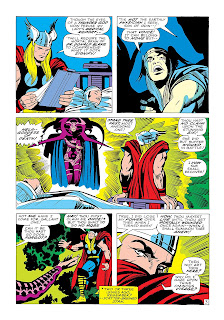 Granted, Jack Kirby staged the visuals that contribute at least fifty percent of the page's serious tone. Still, it's easy to imagine a modern writer-- say, Peter David-- trying to dialogue the same page, and missing the boat entirely. Lee's amateur experience in the theater, however limited, seems to have contributed to his sense of how to show characters both in their "light" and "heavy" moods.

My personal interpretation of Feige is that he's someone who may have read Marvel Comics like a demon, but who was into Marvel, like many readers, mainly for the jokes. The rapid-fire quips of Downey's Tony Stark read a lot more like the snappy patter of the Stan Lee persona than they do like the relatively sober-sided Stark of the comics. Feige even showed some facility with characters with a basically serious outlook, like the Evans version of Captain America, finding ways to exploit humor in other characters without hamming up the main hero.

In the first two THOR films, one can see Fighe and his collaborators trying to do something similar, keeping Thor basically serious while allowing support-characters-- in particular Kat Dennings' "Darcy"-- to provide the humor. That said, Fighe's Thor films don't really make any organized attempts at "high seriousness." The wars of the gods and the giants have no more mythic resonance than the opposing parties of a videogame, and thus it's not surprising that the figure of Hela the Death-Goddess becomes similarly over-simplified in RAGNAROK.

The only other time that Feige attempted another Marvel feature grounded in Lee's lowbrow version of high seriousness was the 2016 DOCTOR STRANGE. I've not yet been able to force myself to re-watch this artless adaptation for purposes of review. But the mere fact that it had to import some dumbed-down humor into the straight-laced STRANGE mythos in the form of the master magician's CAPE speaks volumes about the producers' inability to do anything without the support of jokes, no matter how inane. Thus I shouldn't have been surprised when THOR RAGNAROK stuck a bunch of pratfalls into the encounter of two of Stan Lee's more poker-faced characters, the thunder-god and the master of the mystic arts. 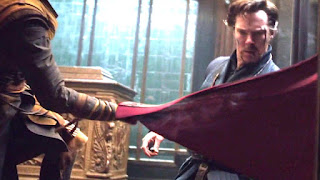 Before seeing RAGNAROK, I had numerous warnings as to how much comedy to expect, but I like to think that I kept an open mind, hoping for something no better or worse than the two GUARDIANS OF THE GALAXY films. But when the film started out with Thor, chained in Muspelheim and teasing info out of evil Surtur--

-- and I realized that it was just a steal from a similar scene in 2012's AVENGERS, with a bound Black Widow interrogating her captors-- 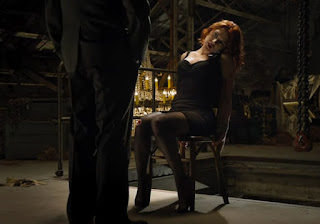 -- it became clear to me that Feige's MCU is beginning to cannibalize itself, and with less interesting results that when Marvel Comics began repeating themselves so badly in the 1970s.

Posted by Gene Phillips at 4:34 PM