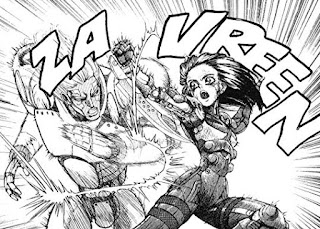 While the previous arc in this series, IRON MAIDEN, sustained enough of a symbolic discourse to qualify as a mythcomic, KILLING ANGEL feels more like the author marking time to create suspense for the heroine's inevitable ascension to the sky-city Tiphares.

KILLING ANGEL picks up with Alita, bereaved after her loss of her soulmate, losing herself in the Scrapyard arena-game "motorball," a sort of ultraviolent roller-derby for cyborgs like Alita. This arc abounds with many examples of cyborgs using motorized kung-fu on each other, all given a heroic significance akin to current Japan's popularized conception of the samurai ethic.

During this arc, Alita makes her first substantive contact with her forgotten past, which I'll record here for possible future reflection. In the midst of a climactic battle, Alita goes into a visionary state, wherein she hears words of a man who is apparently a former mentor:

When in our mechanical forms, we regain the unified senses of our erdlieb, our earthly bodies... witness! The cosmos, the very universe, resides within you, giving form to the ars magna, the Great Art!


Though I haven't reread the ALITA series in some twenty years, I'll wager the author built on this trope in later arcs. Time will tell.
Posted by Gene Phillips at 4:51 PM