I don't consider "the Time Traveler" to be the star of Wells' TIME MACHINE, and from one standpoint I might teem "time itself" to be the star. However, the bulk of the narrative does center itself upon the Eloi/Morlocks period of future-history, and so it's possible to see that one period as the focal presence of the Wells narrative.-- TREES, MEET FOREST (GOD).

The true "hero" of a marvel tale is not any human being, but simply a set of phenomena.-- H.P. Lovecraft.


Since I've recently reviewed both H.G. Wells' TIME MACHINE and the 1960 George Pal adaptation, I decided to analyse both these works and those works most probably influenced by Wells' "Eloi-Morlocks" trope in terms of the "investment/fascination" concepts.

The fact that H.G. Wells chose not to give his focal character a name would seem to underscore Lovecraft's observation that "the phenomenon" is the star of the novel. Since an abstraction like time can't really be the "star of the show," I've determined that "Morlock-Earth" is the exothelic center of the Wells narrative, since it's the "entity" through which Wells expresses his beliefs about the ultimate degeneration of Earth and/or the universe. Thus Wells' work functions by concentrating the reader's emotions on fascination with the phenomenon of the decay of Earth and its inhabitants. 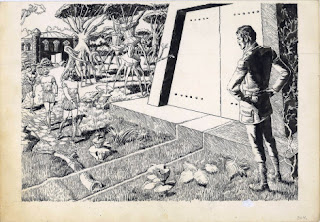 In contrast, though the 1960 movie starts off almost identically to the novel in terms of plot, the David Duncan script gives the traveler (Rod Taylor) the name of George (with other elements in the script implying that he's actually "H. George Wells"). Further, Duncan builds up George's relationship to his Victorian contemporaries, particularly with David Filby (Alan Young), so that George seems like a much more well-defined character, and so indicates that the scripter's strategy is to create the viewer's emotions on investment in George's fate. 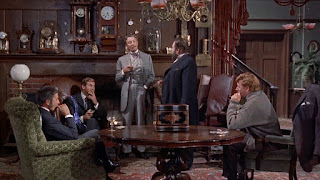 The scenes of George's first time-ventures reinforce this strategy, for in contrast to the novel, George travels to the near future and meets James Dilby, grown son of George's now-deceased friend David. George's moments of grieving for his friend give him greater dimension, as do his humorous moments observing the changes in a dress-shop opposite his own domicile, allowing him some very mild "voyeurism" as he watches a dress-dummy continually undressed and re-dressed. This plays into George's later romance with Weena, in contrast to the Time Traveler's largely paternal relationship to the (much younger) Weena of the novel 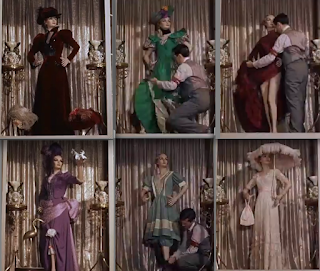 Duncan's main purpose in having George visit the 20th century is to make Wells' vision of cosmic degeneracy more relatable to 20th-century audiences, by grounding the events of "Morlock-Earth"  in the development of nuclear-war and America's use of bomb shelters. Of course, given that Morlock-Earth is many thousands of years in the future, Duncan's future only works if one assumes that the pattern of aerial bombing and human retreat into bunkers kept happening over centuries-- though, to be sure, Wells' SHAPE OF THINGS TO COME does describe a situation in which aerial bombing gets lost and has to be rediscovered over the eons. 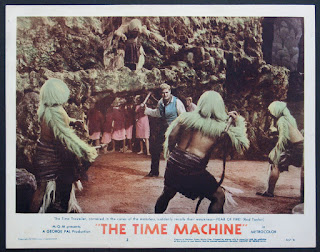 Finally, as I noted in the film review, Rod Taylor's George is much more proactive than the Time Traveler. The Time Traveler, even though he has some affection with the child-like Weena, never raises the possibility of educating the Eloi to advance themselves. Every contact he has with them suggests that they've descended too far into imbecility for that. In contrast, George's efforts to get the Eloi to think and fight for themselves bear fruit: not only does Weena start wondering about how the women of George's time wear their hair, one of the male Eloi comes to George's defense during the big fight-scene, actually striking a Morlock in emulation of George's fisticuffs. This revelation, that the Eloi are not beyond saving, telegraphs Duncan's ending to the film. In the book, the reader doesn't know just why the Traveler, having returned to Victorian London to relate his story, gets back in the machine and leaves, never to be seen again. But the film makes it indisputable that George is returning to bring 19th-century enlightenment to the Eloi and to defeat the savage Morlocks, more or less following the pattern of 19th-ceutury concepts of imperialistic noblesse oblige. 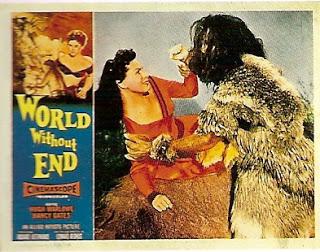 Having described George's impact as a culture hero, though, I have to remark that a protagonist's act of playing "culture hero" doesn't always lead to the pattern of investment. I remarked in my review of the TIME MACHINE film that four years earlier, the studio Allied Artists produced a B-film, WORLD WITHOUT END which anticipated the quasi-imperialistic developments of David Duncan's adaptation of the Wells work. In fact, the estate of Wells allegedly filed a lawsuit against the company for copying the author's book, even though the film's writer-director Edward Byrnes reversed the basic setup of the Eloi and the Morlock, though it's not impossible that he also borrowed from other SF-works for his scenario. In WORLD, four modern astronauts accidentally time-travel to a post-apocalyptic future, where they find savage "mutates" on the surface and an effete, though technologically gifted, civilization dwelling beneath the Earth.

Now, though Bernds' four protagonists have a few distinguishing characteristics, I stated that I found them "exceedingly dull," which didn't help me invest any emotions in their project to restore the ravaged Earth (anticipating Duncan's concept by four years). There is, as I discussed in the review, a concluding battle in which an astronaut named Borden (Hugh Marlowe) fights and kills a mutate in single combat, but Bernds underplays this potentially exciting scene, as if it's no more than a necessary evil. With neither strong characterizations nor physical vitality to enliven the astronauts, they seem to play a role not unlike Wells's Time Traveler: they're just there to illustrate a theme. The true star of the show is the fallen Earth that is to be redeemed, what I tend to call "Mutate-Earth" even though the mutates are destined to pass away. Even the film's title, apparently derived either from a passage in King James or some secondary use of said passage, affirms the idea that humanity, though bifurcated into savages and decadents, will be brought together, and that even the brave astronauts who accomplish this are merely part of some cosmic scheme. 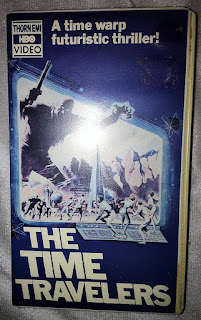 Four years after the debut of Pal's TIME MACHINE, the idea of bifurcation is again used in Ib Melchior's THE TIME TRAVELERS. A group of scientists, all pretty unmemorable, accidentally travel to the far future, to 2071 A.D. Once there, they find the world rendered uninhabitable from nuclear radiation, and haunted by deformed mutants above-ground, just as in WORLD WITHOUT END. And there's also, as in WORLD, just one enclave of technologically-advanced humanity left, though TRAVELERS' script does not in any way portray the future-people as decadent. Their only fault is that the future-humans are devoting all of their efforts into escaping Earth for greener pastures in Alpha Centauri. However, at the climax the mutants invade the enclave and destroy the Alpha Centauri rocket. Humankind is only redeemed because the time-travelers are able to access their temporal portal once more, and to transport themselves and some of the future-humans into an even more distant future-- one in which, in contrast to Wells' novel, Earth has become a virtual Eden once more. And just as I considered Wells' "Morlock-Earth" to be central to the novel, even though the hero also travels to the time of Earth's ending, "Earth 2071" is also central to THE TIME TRAVELERS, even though that fallen world, like that of WORLD WITHOUT END, implicitly leads to the rebirth of humankind with a tone of Judeo-Christian transcendence.
Posted by Gene Phillips at 5:51 PM