Of the many patriotic comics-heroes born in and around the WWII years, Hillman Comics' AIRBOY seems to be the only American character who survived long past the war's end. This may be because, even in the absence of a shooting-war, Airboy still appealed to young readers thanks to the appeal of having his own personally owned plane. Without having come close to reading all of the character's Golden Age exploits, I'd say that in general the art and writing was somewhat better than many comparable postwar series, and of course, I discovered a high level of mythicity in these three interrelated stories. AIRBOY's last issue appeared in 1953, the same year that Hillman quit publishing comics for good. Since I'm not aware that any of their titles were attacked during the anti-comics craze, it may be that the company simply decided that comics were no longer profitable enough to bother with. 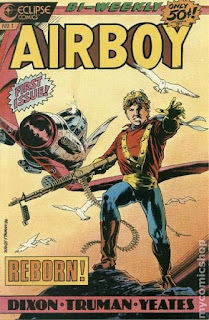 I recently committed myself to re-reading the entire AIRBOY series from Eclipse, which I've long considered one of the company's best productions. I don't know if the Hillman properties had fallen into public domain or if Eclipse actually purchased rights from someone, but Eclipse was certainly devoted to creating a "Hillman-verse." Even from the first couple of issues in 1986, writer Chuck Dixon and his various artists not only created a modern-day legacy version of Airboy, but also brought  back some of the original heroes, some of whom were simply older (Sky Wolf) and some of whom had been transformed (the armored Iron Ace gets turned into a robot).

The new Airboy, David Nelson III, doesn't know anything about his father's heroic past, knowing him only as the head of an aeronautics corporation. The relative innocence of the youth (whose age isn't specified, though he doesn't look fifteen like the Golden Age version) is shattered, both when his father is slain and David learns that his dad was selling arms to a tyrannical regime in the made-up South American realm of Bogantilla. However, David also learns of his father's heroic deeds, and that his revolutionary airplane "Birdie" is still functional, so he dons his dad's old outfit and goes looking in Bogantilla for his father's slayers. There he and his allies (among them the aforementioned Sky Wolf) find out that David II was empowering the tyrants because their master, Airboy's old sorcerer-foe Misery, has extorted the former hero's obedience by threatening his old love Valkyrie, kept in cryonic preservation for the past forty years. The New Airboy avenges his father in part, though Misery escapes, and revives his father's former lover. However, since the new hero looks the same as the old one, Valkyrie is attracted to David. As for his reaction to her, this cover sums it up. 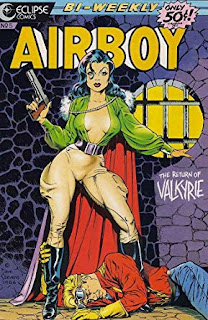 For the next forty-nine issues, Airboy and various allies-- not least the Heap, the original swamp-monster of comics-- alternate between fighting in relatively realistic paramilitary conflicts and fending off the plots of arch-enemy Misery. But the series' most piquant appeal was the "will-they-won't-they" romantic sparks between Airboy and Valkyrie. Clearly, even though Eclipse had designed David III to look just like his father, he wanted her to see him for himself, as opposed to being simply his father's lookalike. Valkyrie, even though she's been revived after the fashion of the Silver Age Captain America, seems to adjust to eighties America pretty easily, but she's got considerable ambivalence toward her potential swain. Little is ever said about the rocky Oedipal issues that  might arise when a son courts his father's old lover, except for a throwaway line that tells readers nothing about New Airboy's actual mother except that she, like Valkyrie, was a pilot. Only once or twice does Valkyrie put her ambivalence into words, as in a dialogue from AIRMAIDENS SPECIAL #1. After a female friend (specifically, a legacy version of Hillman's Black Angel) questions Valkyrie about the latter's feelings, Valkyrie says, "It's just that Davy's younger than I am. When I'm with him, I don't think about that. But when we're apart, I feel as though I 've picked someone up off the school yard. And his father and I..."

That's about all the Oedipal exploration seen in the fifty issues, though there's not much doubt that David III is of legal age. Chuck Dixon, in concert with such artists as Tim Truman and Stan Woch, always supplies dependable action-formula, though in the final issue editor Cat Yronwode remarked that even in the eighties it was a lot harder to do an aviation-series set in the real world than it had been during WWII.

Though the series' main appeal was the romantic soap opera, it did scrupulously follow up on some of the appeal of the early Valkyrie appearances. I remarked in the above cited review that there was an age discrepancy between the Golden Age hero and his femme fatale. There was also a brief flirtation with sadism, and this seemed again on display in this cover for 1988'S AIRBOY AND THE AIRMAIDENS. 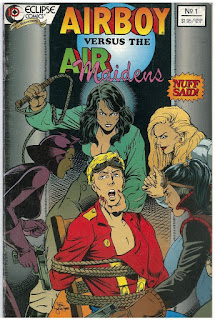 I don't know how many comics-fans of the eighties were invested in seeing the Hillman heroes back, but I for one did enjoy the revivals of such interesting obscurities as the Bald Eagle and Rackman. However, the series didn't really ever establish a modern-day identity for New Airboy, perhaps in part because its makers were so preoccupied with building the Hillman-verse. Further, Dixon didn't introduce any interesting new villains for the hero, though he did a creditable job of making Misery into a master fiend worthy to stand alongside the best of the eighties arch-foes. 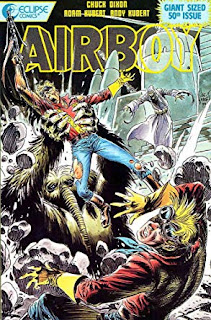 Only once does the series come close to the level of mythicity in the Golden Age Misery stories: in the final issue, done by Dixon and Andy Kubert, with Adam Kubert providing inks. Like his father before him, Airboy ventures into the supernatural domain of Misery and manages to end the villain's menace-- though, unlike his father, this Airboy vanishes from the sight of his allies, and so, even though Misery doesn't claim the hero, his disappearance carries the value of a "faux death." In the final issue's editorial Yronwode mentions the possibility of reviving the hero for an Eclipse graphic novel, but it never happened, though the Airboy franchise did surface again under the aegis of other publishers.

It wasn't the best ride of the eighties. But it was worth a try, nonetheless.
Posted by Gene Phillips at 4:35 PM

It kooks like some Indiegogo funding is complete but they're waiting to see if enough dough comes in to increase the page count.

Thanks for the tip, Scott.