A CONSUMMATION FANTASTICALLY TO BE WISHED

In my previous essay I gave an example of an inconsummate comic-book story, with the aim of breaking  down the difference between (1) the "formal" nature of an archetype underlying a mythic narrative and (2) the mythic aspects of the story proper, which evolve logically from the archetypal idea but are not necessary components of the archetypal process.  To cite the earlier metaphor, they are the "molecules" that a particular creator (or set of creators) choose in order to make the raw idea born from the archetypal process into an organized narrative.  The Jack Kirby CHALLENGERS story is one that displays the essence of a good archetypal concept, but the "molecular structure" of the narrative falls apart on close examination.

In contrast to this, one of the strongest Lee-Kirby collaborations-- on a feature often compared with the earlier Jack Kirby series-- is the fulsomely titled tale "The Red Ghost and his Indescribable Super-Apes," which appeared in FANTASTIC FOUR #13, about six years following the CHALLENGERS story.  I don't get the sense that this story is one of Silver Age fandom's favorite FF-stories.  Yet whatever the flaws of "Ghost," it has a stronger mythic discourse than most FF-tales of the period, and so makes a good example as to how archetype and symbol become "consummated" (though admittedly I didn't make this refinement explicit earlier).  My thoughts on this tale also comprise another entry in the list of my "1001 myths" essays.

The story, appearing during the first few years of the feature's successful launch onto newstands, deals with Reed Richards and his superhero pals launching themselves on a private mission to claim the moon for the democratic powers of planet Earth.  By chance, a near-identical mission takes off from Russia to claim the same sphere for the powers of Communism. 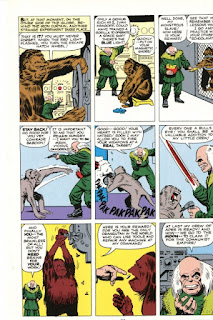 Now, based on this bare description, one might think that the archetype at work here would be the simplistic one of "good vs. evil," with democracy standing in for the former and Communism for the latter.  Marvel Comics did a lot of these simple allegorial tales during this period, and I would imagine that a lot of modern fans are embarassed by this simplication of complex political issues, to save nothing of a possible jingoism associated with them.  Indeed, a number of critics would not dignify such stories with any sort of archetypal reading, for they would assume, in line with Marxist hermeneutics, that the story is simply propaganda for the American way of life.  And there certainly is an allegorical tone underlying the scenario in which the Russian villain Ivan Kragoff trains apes to serve as his fellow moon-vovagers.  Late in the story heroine Sue Storm makes the allegory explicit, by comparing the enslaved apes to the enslaved but sympathetic Communist masses. 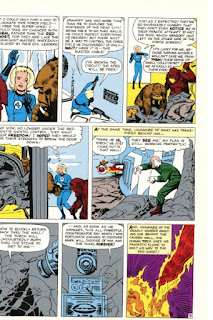 But such a critical reading would be far more simplistic than even the simplest comic-book story.
What it misses is that the core of the story is not simply pitting a flat good against a flatter evil, but having them battle for the approval of a god-like alien, who may be regarded as  a symbolic stand-in for God Himself. 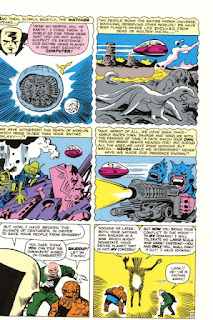 Further, in contrast to other, less complex allegories-- whether from Marvel Comics or elsewhere-- Lee and Kirby devote an inordinate amount of effort to contrast the exemplary behavior of the four American heroes versus the selfish and controlling behavior of Ivan Kragoff.  This elevates the argument beyond merely "good democracy vs. evil Communism," for it speaks to what is good in humankind generally to what is evil in humankind generally.  I note, just for one possible example, a scene in which Reed announces his plan to fly to the moon alone.  His comrades set him straight with a little horseplay, which nevertheless underscores that though Reed Richards leads the group, he does so with "the consent of the governed." 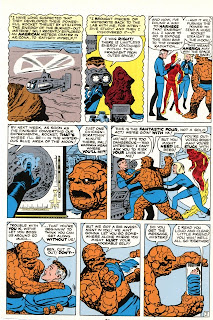 Thus the archetype operating here is not simply "good vs. evil," though it is not unrelated.  I see in the FF-tale something closer in nature to the motif folklorist Aarne-Thompson labeled, "The Kind and the Unkind Girls," which is represented by the (coincidentally Russian) tale of "Faster Frost."  Reprinting Wikipedia's summary:

A  woman had a stepdaughter and a daughter of her own, and she hated her stepdaughter. One day, she orders her husband to take her stepdaughter out into the winter fields and leave her there, and he obeys. Father Frost finds her there, and she is polite and kind to him, so he gives her a chest full of beautiful things and fine garments. When her stepmother sends her father to bring back her body to be buried, he goes to fulfill his task. After a while, the family dog says that the stepdaughter is coming back beautiful and happy.

When the stepmother sees what her stepdaughter had brought back, she orders her husband to bring her own daughter out into the fields. The girl is rude to Father Frost, and he freezes her to death. When her husband goes out to bring her back, the dog says that she will be buried. When the father brings back the body, the old woman weeps.

I am not claiming that Lee and Kirby copied, intentionally or accidentally, the pattern of this story, but rather, that the story's pattern is archetypal, which is to say that it inheres in human culture's need for narratives organized around diametrically opposed factors or essences.  But certainly, even if the heroes of the tale are not especially polite to the Watcher, they are at least deferential, while the Red Ghost trespasses on the Watcher's home and so suffers the Wrath of God. 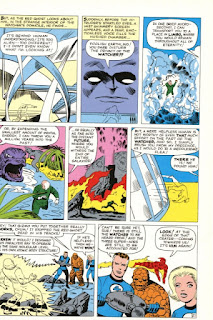 Interestingly, though the Watcher insists that the two forces fight for ownership of the moon-- which the alien is more than willing to cede-- the heroes defeat Kragoff more by outmaneuvering him than by decisively vanquishing the scientist and his apes in direct combat. The story's creators could have done so, but it might have undercut the tale's final irony, in which the three super-apes get hold of the paralysis ray (see above) and turn on their tyrannical master-- patently, a wishful forecast of the fortunes of the enslaved people of Russia.  One might argue that something like this did come about in real life, though it's been argued that the citizens merely exchanged one yoke for another.

Like the "kind girl" in the folktale, the heroes of the story are rewarded, not with treasure, but with the blessing of the godlike Watcher, who tells them that "space is your heritage" and that even though the Watchers will not involve themselves in human affairs, humanity will never be "alone."

By focusing first on the imaginative, archetypal essence of the story, one can avoid the more typical ass-backwards interpretation. In such readings, any story's sociopolitical elements are the underlying cause of its genesis, as seen in Frederic Jameson's blockheaded notion of a "political unconscious," disputed here. Jung's idea of archetypal patterns, which he compares to the "axial system of a crystal."

My distinctions on the nature of archetype and symbol will be explored further in a forthcoming Joseph Campbell essay.
Posted by Gene Phillips at 12:26 PM