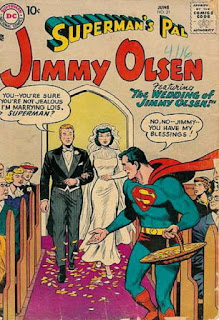 I settled on this story as a "opposite version" of the theme presented in "Superman's Super-Courtship," It's not exactly a well-known story even among fans of the Weisinger "Superman universe" titles, though it did rate a mention in Tony Isabella's "1000 COMIC BOOKS YOU SHOULD READ."

This story, credited to Otto Binder and Curt Swan by GCD, is one of three such tales in JIMMY OLSEN #21, It was published over four years previous to "Courtship," with which it shares a theme common to Weisinger's editorial aegis: the theme of "improbable romance." However, while the later story has some interesting psychological ramifications, "Wedding" is just a routine rendering of a situation that was old back in the days of Greek New Comedy.

Here the improbable romance comes about because of a "Basic Misunderstanding." For years, Jimmy Olsen has worked alongside Lois Lane without a hint of romantic interest between them. Then, because Lois begins showing interest in Jimmy-- she's researching him for a proposed feature article-- he immediately thinks she's smitten with him. This by itself could lead to some mildly promising comic silliness. Naturally, Jimmy has to believe himself to be a "romeo" capable of swaying a mature woman from her "best beau," Jimmy's own buddy Superman. He tries to discourage Lois by doing things that make him look like a "cad," but these forgettable antics backfire so that she thinks better of him,  But in order to justify the hype of the cover, Jimmy has to decide-- improbably, even for this silly schtick-- that the only thing a man of honor can do is to marry a woman so smitten.

In keeping with standard practice, Lois doesn't inform Jimmy of his grievlous error, but pretends to become engaged to him, with the idea of finding some way to let him down easily. She even confers with Superman, who agrees to help extricate her from these comic difficulties. The excuse Lois finds to reject Jimmy without bruising his ego isn't particularly memorable, and the only thing that makes this story inconsummate is its indeterminate treatment of Jimmy's psychological makeup. Though his age isn't stressed, obviously he's in his late teens, and is certainly old enough to have dated. Yet Binder portrays him as if he has the mentality of a small boy-child, who presumes that the only response to a mature woman's lovelorn sentiments is to marry her. There's a slightly amusing moment in which Jimmy pictures himself carrying Lois over the threshhold for their honeymoon; Jimmy looks not a little panicked at the proposition, as if he can't imagine any advantages in bedding Lois; the next panel, appropriately enough, shows him suffering as Lois leaves him to babysit their numerous children.

Since the relationship of Superman and his "pal" is an avuncular one, this concept might have been mythically interesting if Jimmy had been somewhat intrigued with the idea of making it with the girlfriend of his "big brother / uncle / father-figure." But as written, it's a pretty pale product.

ADDENDA: As a matter of critical process I want to specify that I'm not simply critiquing this story's presentation of Jimmy Olsen in terms of the character's verisimilitude. If it were simply a matter of the character acting atypically in different sections of the same story, that would be simply a failure of the dramatic potentiality, which deals with the interactions of conscious personalities. What I'm critiquing is the degree to which Olsen's character is put into a mythopoeic situation-- that of transgressing on the sexual hunting-grounds of a friend / father-figure-- and then fails to follow through on that mythic potential. The story is also a good example of the principle of a non-incestuous "clansgression."
Posted by Gene Phillips at 5:48 PM