I've defined a "null-myth" as a narrative that shows potential for mythicity / symbolic discourse but fails to articulate that potential to its best effect. In contrast, "a near-myth" is a part of a narrative that sustains a mythic kernel of meaning, but does not become unified into a fully-developed "underthought" throughout the narrative.

In essence, a near- myth is identical with what I called a "motif" in this essay:

...I must admit that constituent parts of stories can be mythic, if not actual myths as such. Jung's best name for these story-parts was "motifs," and in his psychological investigations he often treated each motif as if it possessed its own symbolic validity, apart from its function within a narrative.

An example of a near-myth that never gets beyond the level of a solid motif is the idea of the Sentinels, created by Stan Lee and Jack Kirby for X-MEN #14-16. Given that these mutant-hunting robots have been one of the more distinctive antagonists for Lee and Kirby's team of beneficent mutants, I wondered if their original appearance constituted a mythcomic. 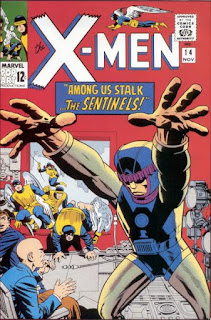 On rereading the "trilogy," I found that it advanced a fairly strong central concept, but that the story-- like most of those in the early X-Men history-- amounts to a lot of chase-scenes and fight-scenes, rather than a sustained myth. For me this simply means that the creators were more focused on giving their audience kinetic thrills, with a few touches of melodrama. (For instance, one issue features the Beast being put into trance by the villainous robots, wherein he reveals how he became isolated from his peers when they suspected him of being a mutant.)  Arguably Lee and Kirby also tend to show their Sentinels acting and speaking too much like other stock Marvel villains, while later portrayals, notably by Roy Thomas and Neal Adams, are more careful to have the robots act and speak like robots.

The basic idea for the Sentinels may have come from Jack Williamson's much-celebrated prose tale "With Folded Hands," in which an inventor perfects a breed of robots whose prime directive is to protect humans at all times-- which the robots interpret as giving them the freedom to enslave humanity, in order to better protect their charges. In the Sentinels tale, the controlling robots are created by Doctor Bolivar Trask, whose name suspiciously evokes that of South American revolutionary Simon Bolivar, who ousted the Spanish from many regions but arguably became a dictator in his own right. Trask also wants to expel a foreign element from his sphere, for he possesses an unexplained animus toward mutant-kind, deeming them a menace to the less empowered human race. 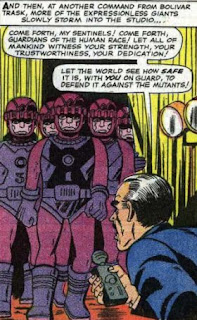 However, as soon as Trask unveils his mutant-hunters to the America public, the robots decide that "the only way we can protect mankind is by conquering it," and they turn, Frankenstein-style, upon their creator, seeking to force him to create more Sentinels. Professor X calls in his X-pupils to attack the Sentinels and there follow many scenes of battle, pursuit and more battle, as well as Professor X's attempt to dope out the Sentinels' Achilles heel.

There are a few moments where Lee and Kirby manage to use the Sentinels as a medium to critique unthinking obedience to orders, as when the robots prove unable to make decisions without prior approval from a superior. It's easy to see this as a shot at the wartime sentiment of "I was only following orders." But such elements remain fairly isolated, perhaps because the X-Men themselves never became strong mythic presences under the hands of their creators. Too often, the heroes seem to be nothing more than Lee and Kirby recycling the tropes of the WWII "kid-gang" genre, with a soupcon of SF-tropes about super-powered mutants. At story's end the man who unleashed the Sentinels realizes the injustice he's done to mutant-kind, and sacrifices his own life to stop his creations-- though of course, they come back for many more X-battles. 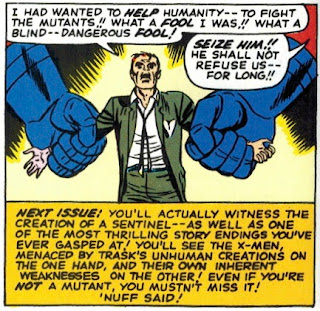 The three-part tale concludes with an anti-zealotry moral by Lee:

“Beware the fanatic! Too often his cure is deadlier by far than the evil he denounces.” (XM#16)

As far as superhero morality-tales go, this one presents a decent enough stab at the didactic potentiality. In terms of the mythopoeic potentiality, though, neither the tropes of the irrational zealot nor the demons he unleashes are given the sort of symbolic complexity necessary to sustain a true myth. This may be in part because when Lee and Kirby started the Sentinels story, they'd just finished one of the early X-Men's few mythopoeic tales-- which I'll examine in my next post.
Posted by Gene Phillips at 4:32 PM