I stated in my review of HICKSVILLE that it consisted of nothing but elitist pie-in-the-sky, stating that "...n the real world, where professional artists have to use their skills to put food on the table, the idea of Wally Wood devoting countless hours to a never-to-be-published fantasy-epic is a pipe dream at best." 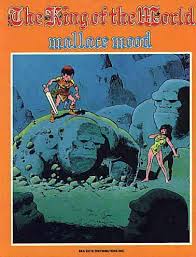 And yet, I could wish for a Gaiman-esque dream-library in which Wally Wood's ambitious "Wizard King" trilogy had not only been completed, but had been realized in its fullest artistic potential. Currently, one can go on Amazon and see sellers marketing "the Wizard King Trilogy," but only two parts of the series were completed, making it more of a "duology." In addition, the second part, entitled ODKIN SON OF ODKIN, is considerably less successful, so much so that I'll deal with it in a separate post as a "near-myth."

Wood, born in 1927. claimed to have conceived of the Wizard King story when he was 10. The artist, despite his fame for his work at EC and Marvel Comics, didn't leave (to my knowledge) any more detailed descriptions as to how the project might have changed in his mind over the next forty years, but I strongly suspect that he, like other artists around that time, saw in the success of THE LORD OF THE RINGS a possible way to court fantasy-fans and also escape the repetitious mill of serial comic-magazines. At least one quote suggests that Wood had read Tolkien before undertaking KING OF THE WORLD, and in my opinion KING recycles many of the same tropes used by Tolkien, though seen "through an EC-vision darkly," as it were. It probably didn't hurt that the "Dungeons and Dragons" game, first marketed in 1974, became successful precisely through mining similar tropes.

Yet in the first installment at least, Wood is doing far more than simply replicating simplified versions of Tolkien. Whereas the English author wanted a firmly traditional "long story," Wood is more concerned with using the fantasy-tropes to exercise his mordant wit and his love of raunch.

Just as Tolkien's protagonist Frodo inhabited the Shire, a remote gathering of hobbits, Wood's protagonist Odkin inhabits the remote village of "the Immi," a short-statured, pointy-eared people who value prudence above all else. When a mysterious shadow haunts the village, someone must go forth to seek the counsel of the wizard Alcazar, but Odkin doesn't sally forth from his small village in quest of adventure or to fulfill duty, but because he draws the short end of a stick. The Immi do, however, like a good shag, and before Odkin sets out on his quest he gets a sexy sendoff from several of the village maidens, which is at least more generous than anything the Shire did for Frodo. While Frodo must leave to protect the Shire from the agents of Sauron, it will eventually come out that the haunting shadow is actually sent by Alcazar, because the manipulative wizard needed one of the crafty Immi to serve his designs. I choose to reveal this plot-thread because it seems to me the most representative of the difference between Tolkien and Wood. Tolkien's good characters are largely good all-through, except when unduly influenced by the corruption of the One Ring. But not only is Odkin a natural born deceiver himself, he clearly lives in a world where deceit lurks around every corner. This aligns KING OF THE WORLD with Frye's concept of the "irony-mythos," which I'll discuss in a separate essay.

Alcazar's first lie is to tell Odkin that to dispel the shadows haunting his village, the dwarvish Immi must get hold of a magic sword imbedded in a tree (a clear borrowing from one of the many variations of the Excalibur myth). Throughout the KING continuity, the sword of Atlan (once the possession of an exalted Arthur-like ruler) takes the role served by the One Ring in Tolkien: the magic whatzit over which both good guys and bad guys contend. On his way to find the sword, Odkin encounters "Iron Aron,"a hulking, not-too-bright warrior, who is also seeking the blade, and whom Odkin cleverly sends in the wrong direction. Aron overtakes the Immi at the tree-site, and, failing to pull the sword free for lack of a "pure heart," snaps it in two. The interference with the sword sparks the appearance of a player Alcazar failed to mention: the Wizard King Anark, who covets the sword now that it's been freed. The giant spectre does nothing more than loom over the Immi, but Odkin chooses to flee with the larger half of the broken sword, leaving Aron to take frustrated custody of the other half. (Later it will also be revealed that Alcazar projected the illusion of Anark to propel Odkin into activity.) 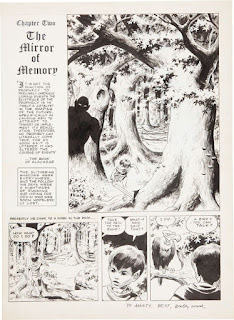 Like Gandalf, Alcazar does have a long-term beneficent design: he knows that Anark is plotting to make war on all civilized kingdoms with his army of bestial "Un-Men." For reasons too complicated to explore in this blog-post, the only defense against Anark is to release the spirit of the living-dead ancient ruler Atlan from an enduring sleep brought about by the Wizard King. Again, Alcazar chooses Odkin to do his dirty work, and again Odkin must wade through assorted supernatural menaces, including a battle to save his people from the Un-Men. This battle culminates in Odkin releasing a horde of rock-monsters to help his side, although Alcazar perishes-- or appears to do so-- at the hands of Anark's demon patron.


Though Odkin did go on to accomplish his task for the most part in the second and last volume, KING ends on a note that seems a deliberate satire of Tolkien. While Frodo had to worry about being corrupted by the One Ring's Faustian influence, in the last two pages Odkin worries that the sword is "poisoning his mind" by forcing him to act altruistically. But he's unable to fling the sword away thanks to the influence of the maybe-deceased wizard. The volume ends as one of Alcazar's minions descends in a winged flying boat in order to help Odkin on his quest. The minion's words are the last in the story: "Let us be off! Adventure awaits us!" Yet the last image-- of Odkin and the minion flying into the sky-- is not just poetically evocative of the liberating spirit of fantasy, but also a subversion of it, imparting a sense of the forlorn to Odkin's quest. 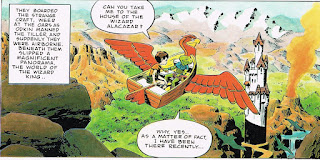 Posted by Gene Phillips at 5:06 PM