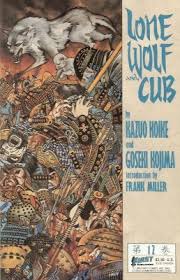 (Note: my translation of this LONE WOLF AND CUB story is the one provided in issue #12 of the First Comics reprint-effort.)

I won't attempt in this post to cover every aspect of the complicated manga-saga LONE WOLF AND CUB, a series taking place during the era of Japan's Shogunate rule. Main character Itto Ogami, a master of the samurai sword and executioner to the Shogun, is cast out from his lofty position due to the political maneuvers of his enemies. With the fall of his aristocratic house, he wanders Japan as a masterless ronin, hiring out his sword as a master assassin. At the same time he's constantly pursued by enemies for the price on his head. His only companion is his very young son Daigoro, whom Itto usually pushes in a baby cart.

This image alone, a melding of the worlds of innocence and violence, is quintessentially Japanese in character. That said, not every LONE WOLF story is equally mythic. Some stories are simply tales in which Itto takes on some powerful foe and wins out. Other stories succeed in communicating the rigor of the samurai ethos but characters may remain flat.

"Executioner's Hill" displays more mythic resonance than the average tale. It starts with six roving bounty hunters, impoverished due to a lack of victims. One of them complains, "The world's gotten peaceful too damn fast." The group's leader, known only as Shiwasu ("boss"), tells them that they'll have to go looking for fresh hunting-grounds. However, on their way out of town, they spot Itto with his baby-cart. Siwashu gets the idea that Itto must be saving up the gold he earns for his assassin-jobs in order to vanquish his foes and rebuild his family line, so that Daigoro can inherit this status. The hunters manage to capture Daigoro, hoping to use the child to blackmail Itto into surrendering his money. 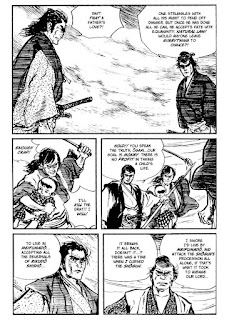 The LONE WOLF world is one in which the desire for money and creature comforts is distinctly inferior to the pitiless road of the samurai-- particularly one who, like Itto, views that road as the road to hell itself. Itto will not yield anything for the life of his son, since he regards both of them as fated to die on their path of violence. Thus creators Kazuo Koike and Goseki Kojima craft a sociological myth opposing the path of self-interest and comfort to that of selfless, though not especially beneficial, violent action. I wrote in this essay that Lady Snowblood, another of Koike's creations, was one of "a long line of Japanese heroes whose raison d’etre concerns committing brutal actions with a near-mystical detachment." Itto Ogami is perhaps even more effective in transmitting that ethos than Snowblood.

There are some other poetic tropes in the story: both Itto and his main adversary Shiwasu are compared to wolves, with Shiwasu clearly being portrayed as the wolf who has become relatively "tamed" by civilization. In addition, the story displays a high level of craft with respect to action sequences like this one, allegedly a major influence on Frank Miller (cover artist for this First reprint). 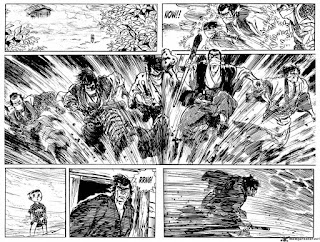 Posted by Gene Phillips at 6:29 PM