I've cited a number of near-myths already, as well as talking about why they aren't as *inconsummate* as the null-myths,  but my recent re-readings of the original 1970s Ghost Rider comic underscore my thoughts regarding a "fair" work that lacks the "unity of action" that could have made it good.

First, though artist Mike Ploog shares credit on GHOST RIDER with writer Gary Friedrich, I believe Ploog's orientation probably was the controlling creative influence. For one thing, early in 1972 Ploog had originated, with three other writers, the WEREWOLF BY NIGHT feature, which ran in the previous three issues of MARVEL SPOTLIGHT before the lupine protagonist received his own series. Ghost Rider took the SPOTLIGHT position for seven issues before he also gained his own title.

Both the Werewolf and the Ghost Rider were heroes who transformed into monsters with the fall of night, though Ghost Rider soon dispensed with that trope. More importantly, both characters had extreme daddy issues. In the case of Jack "Werewolf" Russell, his natural father had died, and his mother remarried a man Jack didn't care for. When the mother also passed on, she forbade Jack to show his stepfather any disrespect, and so for a time Russell had to tolerate the man, whom he dimly suspected of having caused his wife's death. Some time later, the stepfather was vindicated, but in the first stories Ploog established the idea of a transforming-hero filled with rage at a father-figure, but forbidden to act against him. 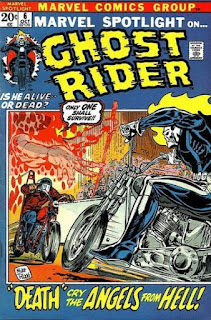 GHOST RIDER was more complicated, though not always in a good way. As a child Johnny Blaze loses his natural father, a motorcycle-daredevil (the mother is not mentioned in the Ploog issues). Since the father had been part of a traveling carny-act, young Johnny is adopted by another carny-family: the Simpsons. Crash Simpson was almost an alloform of the late Mr. Blaze, being another middle-aged daredevil rider, and he and his wife became surrogate parents to Johnny. However, their natural child Roxanne was not in Johnny's eyes a "sister," and as they grew older a mutual attraction surfaces. 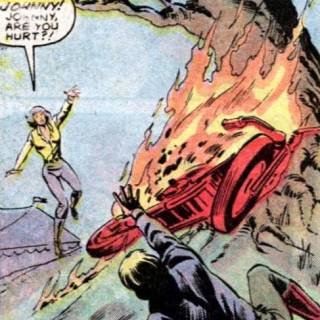 Before either young adult can do anything about it, though, another tragedy strikes. During a practice performance Johnny's bike catches on fire. He rides it away from the surrounding watchers and ditches it, but Mrs. Simpson runs after him and is killed by the blast of the exploding cycle. Before she dies, Johnny's surrogate mother asks him to refrain from risking his life as a daredevil, and he agrees. Not only does this parental taboo restrain Johnny from exercising his natural riding talents, it further alienates Roxanne. She deems him a coward for not riding in the show, and worries that her father is getting too old to do so.

On top of these dramas, one day Crash announces that he's going to attempt a dangerous stunt, partly because he's contracted cancer. Johnny's reaction is a strange one since there's been no mention of any religious tendencies on his part: he calls up the Devil and makes a bargain to save Crash's life. 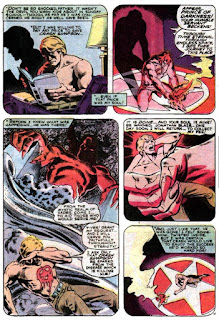 The bargain goes sour when Crash dies of the stunt but not the disease. Johnny then duplicates the feat in memory of his surrogate father, briefly earning Roxanne's ire for his having let her father do the stunt in his place. However, that ire is quickly forgot when the young woman witnesses Satan coming to claim his prize. Roxanne somehow uses her supposed "purity" to repel the demonic presence (maybe it's a good thing she and Johnny didn't have pre-marital sex, eh?) But now Satan's power causes Johnny to transform into a skull-faced being with hellfire powers. 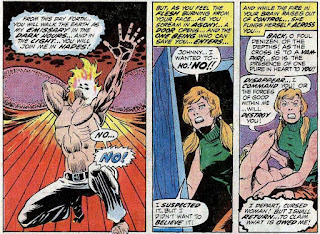 All this would be a fairly routine setup, except that, unlike Johnny's natural father, Crash Simpson comes back-- not as a HAMLET-esque spectre requiring revenge, but as an emissary of Satan, perfectly willing to sacrifice Johnny so that he Crash can get out of Hell free. He's also more than willing to sacrifice his own living daughter to this end, but instead he ends up fighting the Ghost Rider in Hell itself. 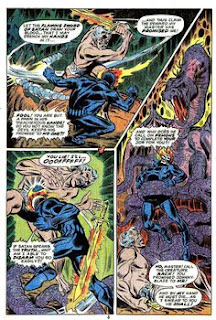 Despite all these perfidious actions, though, the "bad father" again does a turnabout. Overcome with sudden paternal affection for his surrogate son, Crash revolts against Satan, makes it possible for Johnny to get back to the real world, and presumably remains in Hell, being tormented for eternity. Roxanne forgets everything that happened to her and the rest of issue #8 is devoted to confronting the hero with a new menace.

The setup of WEREWOLF has an almost Freudian feel-- the hero abominates his "new father" but is forbidden from taking action against him. In contrast, there's some Jungian potential in the GHOST RIDER arrangement, in that the state of "father-ness" is in line with what Jung called a "superordinate idea." Johnny's never-seen natural father "Barton Blaze" functions as an "absent father" in that his death takes him out of Johnny's life. Though Johnny apparently enjoys being raised by the Simpsons, Crash Simpson seems no more than a token father-replacement: in the first issue he neither provides Johnny with a role model-- which Johnny already has-- nor does he restrict him overmuch. (If he's aware that Johnny has a crush for Roxanne,  the story doesn't show it.) Only after Mrs. Simpson interferes with Johnny's natural development, forbidding him from being a cyclist, does Johnny come in for censure from both Crash and Roxanne. But the surrogate mother's motives for demanding Johnny's sacrifice-- given that he's not even her natural child-- come down to little more than a plot-device. (It's particularly amusing that Johnny, not Roxanne, is the one seen talking to Mrs. Simpson on her deathbed, demonstrating that the creators weren't overly concerned with any character except Johnny Blaze.) Even Johnny's attempt to garner a favor from Satan might be construed as an appeal to a "father-imago," given that the Devil is traditionally "the Father of Lies." Further, one issue after Ghost Rider got his own comic, Marvel readers met the Devil's actual offspring in the "Son of Satan" feature (with which Gary Friedrich, though not Mike Ploog, was also involved).

Crash Simpson's double-turncoat is even less well-imagined. Ploog and Friedrich don't bother to venture any reason as to why Crash-- who seems to have been a largely good fellow in life-- ends up under Satan's aegis in Hell. Nor is there any attempt to explain why he turns on Johnny and Roxanne so easily: the creators are purely concerned with presenting the Ghost Rider with one crisis after another. Despite this rambling introduction, though, the visual appeal of the character clearly struck a chord with readers, for he enjoyed a much longer career than most of Marvel's  1970s monster-heroes. Whether he ever managed to appear in a mythically *good* story, though, remains to be seen.

Posted by Gene Phillips at 5:09 PM