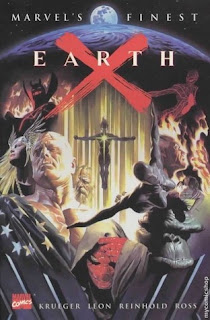 EARTH-X is the first of three collected serials based on an “alternate history” version of the Marvel Universe. On all three, the story concept is credited to Alex Ross (whose fame had crested following his work on MARVELS and KINGDOM COME) and Jim Krueger. Ross’s hyper-realistic art, however, appears only on covers and in character sketches, with other artists tapped to perform the chores of visual storytelling, Jean Paul  Leon being credited with the entirety of EARTH-X. I have not yet re-read the two sequels, but my recollection is that neither felt as thematically unified as EARTH-X.

To be sure, any unity in the Krueger-Leon series is rather akin to that of the Frankenstein Monster, being composed of many disparate parts. On one level—perhaps the most important in terms of marketing the series—is that EARTH X is, like MARVELS, a love letter to Silver Age Marvel. However, where MARVELS attempts to tell the story of the share continuity from the point of view of the common man, EARTH-X concerns itself with seeing the “gods” of the Marvelverse through a funhouse mirror, darkly.

This particular iteration-- which, for sake of conciseness, I’ll assign to Krueger, since he’s the one doing the heavy lifting—is most concerned with a particular aspect of Marvel: the grandiose apocalypse-scenarios given their fullest form by the team of Stan Lee and Jack Kirby. There had of course been earth-shattering events in comic books long before Lee and Kirby collaborated. However, features like FANTASTIC FOUR and THOR gave Kirby the imaginative canvasses on which he could unleash the full extent of his visual imagination, while Lee provided characterizational context for the contending forces. No other collaborations of the period—Fox/Sekowky, Thomas/Adams, or even Lee/Ditko—were as good at bringing the familiar world to the brink of chaos.

In any alternate-world story, the pleasurable distortion of the commonplace is one of the key appeals of the re-imagining.  Thus, EARTH-X posits a Marvel-world in which the boundaries between the human and the superhuman have been erased—or at least Krueger claims that they have. In practice, the reader doesn’t see that much of people who used to be rank-and-file humans. In keeping with works ranging from X-MEN’s “Days of Future Past” narrative to the aforementioned KINGDOM COME, EARTH-X is mostly about the weird, funhouse-mirror versions of Marvel’s heroes and villains. Some of the mutations have special resonance within the story, on in the context of Marvel’s storied history, while others seem to be the results of mere whimsy, along the line of Alex Ross saying, “I think I’ll make the new Captain America bald.” 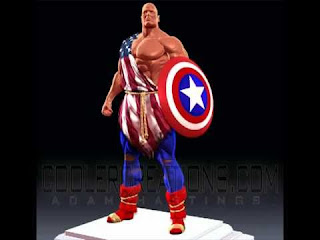 Even though the title of EARTH-X sounds like a reference to Marvel’s inescapable mutant franchise, Krueger’s plot hinges on the Lee-Kirby backstory fot the Inhumans.  These FANTASTIC FOUR alumni were originally a race of genetically-advanced Earthpeople, though Lee and Kirby quickly retconned the characters into a experimental project by the alien Kree, a breeding-ground for super-warriors designed to serve the Kree’s martial endeavors. Without dwelling on assorted plot complications, the Inhumans’ capacity for self-mutation is at the root of the entire Earth’s big transformation—though this comes about as a response to yet other aspects of Marvelverse continuity.

I said earlier that Krueger’s opus was a love letter to Silver Age Marvel. The majority of the primary characters debuted in the 1960s: the Fantastic Four, Iron Man, Thor, the Avengers, Captain America (technically a reboot of the Timely version), the Hulk, the Inhumans, the X-Men, and the Black Panther— and most are Lee-Kirby characters. Krueger finds some space for such non-Kirby characters as Spider-Man, Doctor Strange, and Daredevil, though these are all relegated to lesser roles in what seems like a predominantly Kirbyesque catastrophe.  At the same time, EARTH-X is not “sixties retro” in the least, for the Inhumans-Kree core of the plot is folded into an even more cosmic scenario borrowed from the following decade: Jack Kirby’s 1970s ETERNALS series.  Kirby designed the short-lived series to stand apart from the regular Marvel universe, but a few years after the end of the series (and the end of Kirby’s contract with Marvel)  “continuity savant” Roy Thomas devoted several issues of THOR to blending “Eternals-Earth” with that of “mainstream Marvel.” 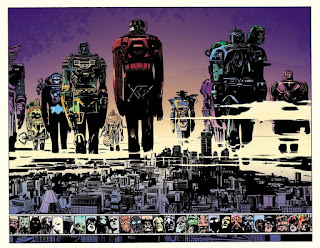 Certainly Kirby’s ETERNALS exceeded the Inhumans-Kree plotline in sheer scope. Mysterious extraterrestrial titans, the Celestials, arrive on Earth, standing as imperturbable sentinels that do not deign to interact with humankind. It soon comes out that the Celestials are responsible for engineering not only the human race, but two other races, the Eternals and the Deviants, whose special powers and weapons caused early humankind to regard the Eternals as gods and the Deviants as demons. Roy Thomas seemingly sweated blood, finding ways to make it possible co-existence between science-fiction gods like Kirby’s “Zuras” and the already established “magic-based god” known as Zeus. Since Krueger isn’t interested in the “magical gods” of Marvel—or for that matter, the mystical dimensions of Doctor Strange-- he simply explains away all of the Marvel gods as a race of metamorphic aliens. In Krueger’s cosmos, only science fiction can beat science fiction. 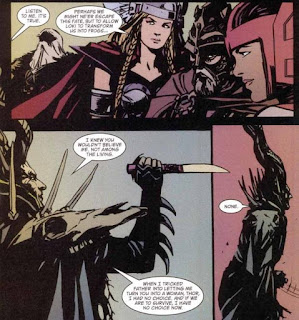 The transformation of Marvel-Earth is, in the long run, brought about to keep the Celestials from simply extinguishing Earth when they’re finished with it.  However, Krueger’s plot is far from linear, and the mystery of humanity’s transformation often takes a backseat to showing this or that Marvel character in a weird new situation. A few are “old favorites” in name only: Matt “Daredevil” Murdock is said to be dead, but a new Daredevil, who is “without fear” because he can’t be killed, has taken his place.

Two-members of the Fantastic Four—the Invisible Woman and the Human Torch—have died, along with the super-group’s foremost enemy Doctor Doom; as a result, Mister Fantastic has become a recluse who lives in Doom’s castle, seeking for the solution to the transformation. In one of Alex Ross’s better re-conceptions, the Hulk, once a goliath with a tiny mind, has become separated into a truly mindless brute controlled by a juvenile version of Bruce Banner. If nothing else, this re-conception provides some nostalgia for a particular issue of the first INCREDIBLE HULK series, wherein young Rick Jones was temporarily able to control the mammoth man-monster. Children have become less common now that everyone has new powers, though oddly enough the aged-looking Captain America is forced to battle a new incarnation of the Red Skull: a mutant kid so young that he doesn’t even know who Hitler was. 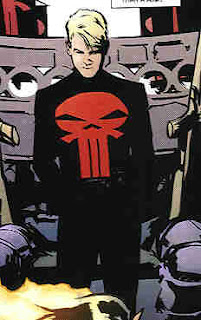 Though there are some resonant moments regarding the various transformations of heroes and villains, Krueger is at his most philosophical when dealing with two onlookers, both of whom were Kirby creations. The older creation, co-authored by Stan Lee, is the alien Watcher, who provides a running commentary on Marvel’s history for the benefit of a less well-informed observer. This is Aaron Stack, a.k.a. Machine Man, whom Kirby solely created for a Marvel’s feature based on Stanley Kubrick’s “2001: a Space Odyssey.” (Amusingly, Aaron is brought into the Watcher’s abode amid imagery that strongly references the imagery of the Kubrick film—to say nothing of the film’s relevance in terms of  “alien experiments.”) 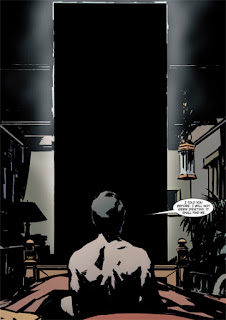 The Watcher, who has been stricken blind by an unknown assailant, wants to make living robot Aaron into a new Watcher.To do so, the Watcher must try to convert Aaron to a disinterested viewpoint of humanity’s struggle. Here’s the Watcher trying to go all Nietzsche on Aaron Stack, explaning why human beings resented their superhuman saviors:

…to be saved is to be weak. And to be weak, one must acknowledge that one exists in a constant state of need. Thar, in his normal state, man is found to be lacking.

No less Nietzschean is the Watcher’s statement on eternal warfare:

Mankind cannot live in peace with [sic] himself.  His nature denies this.

While these philosophical ruminations have some broad applicability to the theme of EARTH-X, Krueger doesn’t succeed in making the Watcher’s credo fit into his easy acceptance of the Celestials’ ruthless agenda. Aaron Stack, as defender of humanity, is also not quite able to refute the Watcher’s vow of non-interference by the jejune statement:  “To do nothing in the face of need—that’s evil.”

Like many of the Marvel-DC multi-character epics, EARTH-X loses perspective by dint of concentrating only on superhuman protagonists. Even the script for 2004's INCREDIBLES, whose author ostensibly did not intend to invoke Nietzsche, hones in on more of the conflict between savior and saved more profoundly than does Krueger’s opus. Still, there is enough of a symbolic discourse here to rate EARTH-X as an interesting mythcomic.

Posted by Gene Phillips at 3:16 PM