The back cover copy for this week's mythcomic, CATWOMAN DEFIANT, correctly states, "Since Catwoman made her debut in BATMAN #1 in 1940, she has become one of comics' most popular villains." However, like other Bat-villains of the Golden Age, Catwoman's potential for symbolic discourse always remained somewhat restricted. I've mentioned some of this potential in other essays, as I did in LEAD US NOW INTO TRANSGRESSION:


... because the established mythology at the time of this 1954 comic continually emphasized a romantic tension between Batman and Catwoman-- that's the narrative value-- the scene (which isn't in the story) takes on a significant value of "battle of the sexes," which is certainly one motif within the story proper (a reformed Catwoman returns to crime because she wants to challenge Batman again). We cannot know if the adult raconteurs who crafted the story (Edmond Hamilton and a "Bob Kane" ghost) were aware of the S&M associations of the whip, particularly when it's wielded by one gender against the other, but if they did they may've assumed that the scene would "tease" readers into buying the comic even though, being 1954 juveniles, they might not know consciously why the scene seemed appealing.


The one Golden Age story that comes close to realizing Catwoman's potential-- 1954's "Jungle Cat-Queen" from DETECTIVE COMICS #211-- was also her last appearance during that Age, after which she vanished from DC Comics for undisclosed reasons, only re-appearing in 1966.

The feline villainess, who had briefly reformed a few years earlier, came back to the criminal life with a vengeance, and makes one of her most potent appearances robbing a mail-plane with the help of a big black panther, and then escaping in her "Cat-Plane." 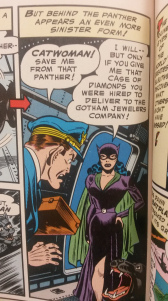 Batman and Robin are quick to pursue in their Batplane, and just as they're nearing her island hideout, Catwoman performs a "wing-ecdotomy" on the Dynamic Duo's vehicle. The site of a giant cat-plane shredding the Batplane's wings is alone worth the price of the story, but there's more to come. The heroes bail out and land on the island. They come across a small coterie of white hunters, but the hunters trap the heroes, revealing that they're crooks working with Catwoman. When the villainess shows up, she's attended by a lion and a tiger, suggesting that she's somehow become a "mistress of animals," when before the biggest creature she ever controlled was a housecat. It'll later be revealed that all the big cats have been circus-trained-- implicitly brought into Catwoman's hands by the crooked hunters-- but for the time being, Catwoman plays her image as a "mistress of animals." 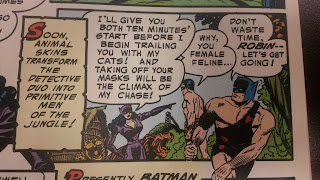 For no good reason, she forced the captive crusaders to don animal-skins a la Tarzan, and chases them through the island-jungle with the cats. She claims that she plans to unmask them when she catches them, but this may be a cover for preserving their lives against the other crooks, since she's seen luring her own beasts off the heroes' trail. Inevitably, Batman and Robin get the upper hand over the beasts and their trainers, but Catwoman gets a reward her for refusing to kill the good guys, in that the script allows her to get away at the end. 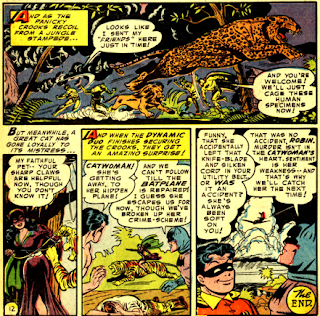 Given that one of the big attractions of Edgar Rice Burroughs' TARZAN mythology is sexual in nature, scripter Edmond Hamilton seems to be upping the sexual elements by having Batman (and, to a much lesser extent, Robin) turned into jungle-men. There's naturally no actual sex between Bat and Cat here, but their contention through the agency of controlling lower animals may be deemed a displacement of such sexual energies.