Note: I'll probably keep using the phrase "stalking the perfect term" over and over, world without end, until someone correctly identifies what book-title by a famed comic-strip author I'm punning upon.

I introduced my literary neologism "dynamization" way back in this 2008 essay.  It was already a real word coined as computer-science jargon:


"In computer science, Dynamization is the process of transforming a static data structure into a dynamic one"


I was seeking a value-neutral description of the process usually called "gratification," which has over the years acquired a negative value-connotation, despite the attempt of Leslie Fiedler to provide perspective with his distinction between "unearned gratification" and "earned gratification."

I don't renounce anything I've written thus far about the *process* of dynamization, but as I contemplate a new series of essays that explore why audiences have varying tolerances for *kenotic* as well as *plerotic* pleasures, I find that "dynamization" doesn't quite fit the bill.

I acknowledged a possible problem with the term the following year in DYNAMIZATION= SUPERIORITY DANCE, though I didn't follow up on it:

There's no reason that dynamization itself-- described here as a movement from a static to a dynamic state, at least as judged by the observer's set of parameters-- *must* connote that the latter is automatically superior to the former. Equally, the reverse would be no more true of any hypothetical "staticization." However, inasmuch as human society and culture is inherently hierarchical in one way or another, the dominant tendency is to say that what is perceived to be dynamic is usually assigned superior status to that which is perceived to be static, as was the case when Henri Bergson used the terms in his philosophy.

I didn't specify what works might be examples of the opposite movement, from relative dynamism to stasis.  But lately it occurs to me, as I contemplate Gaster's idea of kenosis, that a story like Franz Kafka's METAMORPHOSIS serves my purpose well. 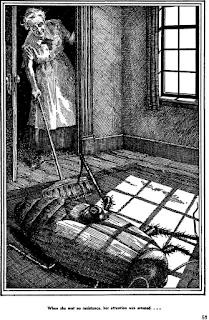 I confess that I've read no biographies of Kafka except the one illustrated by Robert Crumb, but I find it hard to believe that another biographer could offer a significantly different picture of the writer.  While it might not be strictly correct to term Kafka a "masochist," his work shows an obsession with imagining his idealized self-- such as Gregor Samsa in the short story-- subjected to all manner of humiliations and self-denigrations.  In METAMORPHOSIS, one might regard the worst aspect of Samsa's unhappy cockroach-ification is that once he's dead every one in his family is seen to be better off without him.

What's the appeal of such a self-abnegation?  Whatever it is, "dynamization" doesn't describe it well enough, since the character actually descends into the stasis of an unimportant death.  And I certainly don't seriously contemplate using the term "staticization" at all.

Plainly, since the processes of plerosis and kenosis take so many different forms in art and literature, they must have a common appeal for humanity.  One could argue that even in a downbeat irony like this tale, both author and reader are to some extent "gratified" by descending into such kenotic depths, but again the accumulated connotations of the word work against its use in this manner.

Currently, though, I can see "validation" as working across the board, whether one is speaking of the kenotic or plerotic, the simple pleasures of "unearned gratification" or the more demanding ones of "earned gratification," and all of the Fryean mythoi with their varying types of *conviction* and *stature.*

In addition, since I use the terms *dynamis* and *dynamicity* quite a bit, "validation" has the advantage of avoiding yet another sound-alike.

Posted by Gene Phillips at 5:08 PM