In the comments-section for COMIC HERO VS. COMIC DEMIHERO, Richard Bensam provided a possible corrective:

"One quibble: starting with the issue after Kirby's departure and lasting through the end of the series a couple of years later, there was an effort to reinvent Jimmy Olsen as a crime-fighting adult reporter. This started with a short run of issues drawn by Mike Sekowsky, one of which also wrapped up a couple of dangling plot threads from the Kirby issues. This was followed by the "Mr. Action" era, which tried to marry the two-fisted investigative reporter angle with more traditional SF elements and the return of Lucy Lane. Both tries came across as an attempt to bring a contemporary TV action hero style to comics.

After that, the Superman Family book picked up the issue numbering from Jimmy Olsen and kept going for quite a few years, but I stopped reading so I don't know what happened to Jimmy after that.."

All true, but it doesn't affect my overall estimation of the JIMMY OLSEN series, because all of my speculations on characters' "mythos" or "persona" are governed by my formula of the "51 percent rule," which might need some expansion in future.

I commented in the aforesaid essay that the JIMMY OLSEN feature started off with a fairly serious "Hardy Boys" tone, portraying Jimmy as a resourceful fighter, despite the humorous-looking cover of the first issue. 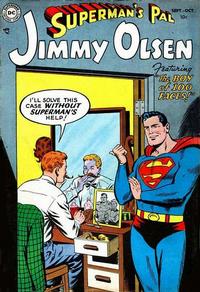 Soon enough, however, the tone of the series shifted to more overt wackiness, as in #4. 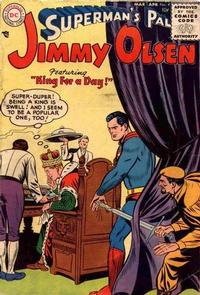 DOMINANTLY, the comedic orientation continued for most of the run, up until the Kirby period.  This doesn't mean that there weren't occasionally some very adventure-oriented issues.  JO #99-- written by none other than Jim Shooter-- eschewed the usual comic mishaps and showed Olsen battling the forces of a supervillain, the Weapons Wizard, with the aid of costumes that gave him Legionnaire-powers.  Usually whenever Olsen wore a costume or assumed a tough-guy persona, there was some element of parody involved, but not here. 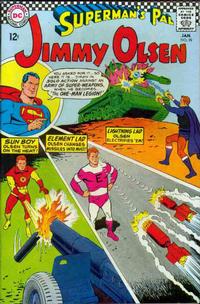 Nevertheless, most of the covers before Kirby depicted either sitcom-style antics or phony melodrama, such as the last issue before Kirby appeared in #133. 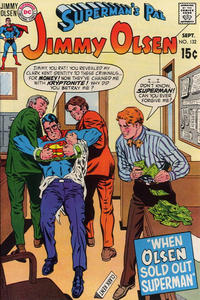 Kirby finished up his run in #148 (albeit a run interrupted by at least one reprint issue).  Richard is correct that during the remainder of the OLSEN run, the creators did attempt to make Olsen's adventures less comic in tone.  Here's a fairly suspenseful cover for issue #151: 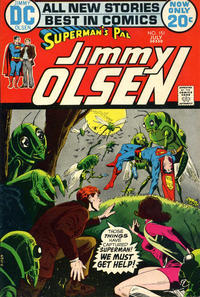 However, three issues later, JO #154 gives us a return to what looks like Mort Weisinger-style sitcommery. 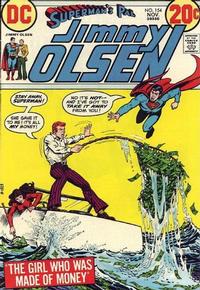 I confess that though I've read the remainder of the OLSEN run through its last issue in #163, I don't recall the stories well, but I'll bet the Leo Dorfman script for "Olsen the Red, Last of the Viking Warriors" was somewhat less than serious-minded.  That's essentially why I don't regard those last fifteen issues to be a "sustained" attempt to keep Olsen in the mode of a serious adventure-hero, as he was in Jack Kirby's hands.

As for the SUPERMAN FAMILY stories featuring Jimmy Olsen, I've probably read most or all of them, and one might make an argument that they were more consistent in presenting Olsen in the mold of the many forgotten crusading reporters of Golden Age Comics like "Scoop" Scanlon. Probably the melodramatic stories about Lucy Lane's return were played straight as well.  So that *might* be the only other time Olsen was consistently portrayed as a "formidable adventure-hero" in addition to the Kirby run. I'd have to do a re-read to check them out.

However, even if you take however many SF Jimmy-stories there were-- twenty? thirty?-- and add them in with the fifteen Kirby stories-- they don't outweigh the dominant image of Olsen as a comic demihero-type, more concerned with just getting by than with being a crusader-type.

So if I do a reread on the SF Olsens, I may well need to modify the statement that the Kirby run was Olsen's only sustained outing as an adventure-hero.  Time (as in, how much time I have) will tell.

Posted by Gene Phillips at 4:50 PM

I agree with all of the above! If my footnote in the earlier post is meant to illustrate anything, it would be that some creators after Kirby also made attempts to find a new role for Jimmy...and that these attempts didn't succeed in permanently altering the dominant perception of the character any more than Kirby's version did.

Cool; thanks for the input.