Reader A. Sherman Barros brought to my attention a comment that HU columnist Robert Stanley Martin made about Milt Caniff's TERRY AND THE PIRATES: After linking to Digital Comics Museum's copy of TERRY AND THE PIRATES #7, Martin wrote: "Those who click to read the online scan should be aware the stories feature racist caricatures." He wrote some other stuff in the comments-section as well, but first I'll deal with the actual comic book itself, which reprints a selection of Caniff's famous comic strip. What exactly happens in the issue to merit the caution about racist caricature?

Well, as far as I can tell, the only "racist caricature" in the story is that of recurring character Connie. Here's a representative scene: 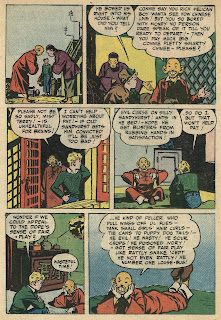 As far as I can tell, Connie's offenses are twofold: he speaks in a comic dialect, and he's as homely as sin, with big ears and buck teeth.

Now, I'm not at all a fan of Caniff's character. I think Caniff writes his dialect in an ootsy-cutesy manner I find abominable. However, he's far from the only character who speaks in an affected or stilted manner, and that includes the titular Terry's nominal guardian Pat Ryan. What I take away from Connie's fractured dialect is not that he's part of some racist conspiracy to make Chinese people look stupid, but that Caniff wasn't especially good at rendering English in dialect-form.

As for his ugliness-- well, yes, Connie's not pleasant to look at, but I for one would look for other evidence that proved him to be a racist construct. For instance, Connie would definitely be racist if all other Asians in the strip were similarly depicted. If they're not-- and I think Martin would admit that they are not-- then Connie may be more in the vein of the "funny looking sidekick" than of the "racist caricature."

Most of the funny looking sidekicks of comic strips are forgotten now, but superhero comic books gave the form a new lease on life-- and a fair number of them are Caucasians.

One of the most famous is Doiby Dickles from GREEN LANTERN: 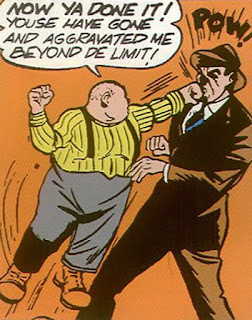 And here's Stretch Skinner from WILDCAT:

Notice the common factors: both sidekicks talk funny, and both are homely.  Both function, in essence, to make the main hero look and sound even better than he ordinarily would.


Now, I'm not denying that it's possible for an artist to create a racial caricature that does communicate ill will toward the race depicted, and to do so subtly . It's even possible that an artist might depict most of the characters in his story as relatively normal, yet choose to single one character out to make him the butt of racist jokes. Certainly Connie is the target for sidekick-humor. But is it racist humor?

Here's an interesting scene from TERRY #7: 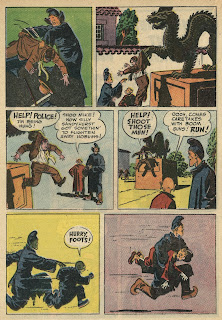 To fill in some blank spaces: the fellow getting hung up on the dragon by Big Stoop-- a Swedish character very improbably disguised as a Chinese laborer-- is a rich white guy named Sandhurst. Not long after some of the locals disparage him for being an American who puts on airs by talking Brit-style, Sandhurst orders his car's driver to run Connie down. Stoop pulls Connie out of the way. Sandhurst orders the car to stop. Then he attacks Connie, hitting him with his cane-- at which point Stoop introduces him to the dragon. So the sequence ends with Connie the racist caricature having the laugh on the rich WASP. Moreover, when the story was first published readers did not yet know that the silent strongman was not Chinese, and so the original effect is that of two Asians having the laugh on a nasty white guy.

All of which raises two questions:

(1) Is it possible to have a POC sidekick without having him look at least nominally handsome, as with the reboot of THE SPIRIT? 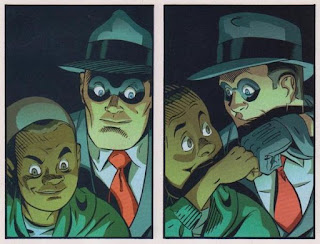 (2) If the only ugly, dialect-using sidekicks out there are white guys like Doiby and Stretch-- does that not constitute a subtle form of racism in itself?

Posted by Gene Phillips at 5:46 PM

I can't believe Martin really wrote that "Those who click to read the online scan should be aware the stories feature racist caricatures."! What does that say about his readers?

Anyhow, you made your point directly and concisely and, above all, pertinently. I must confess I was not familiar with Terry and the Pirates (I saw the serial on DVD, but hadn't read any of the comics or the strips) and so I attributed the eventual racial stereotyping to "signs of the times". But now you have shown clearly that there are no such stereotyping at all in the character of Connie.

Curious, I went and read the issue at hand, and browsed some others from the CBPlus database, and although I entirely agree with you, I think you stopped a little short of the complete picture.

You pointed precisely to the usual side-kick role and its characteristics, with pertinent examples, and pointed out that not all other Chinese characters in the story are drawn with the same caricatural ugliness of Connie. Indeed, that is as good a litmus test as one can devise.

But reading the story proper, one is led to feel that Connie acts almost always with extreme loyalty and dignity; something that indeed contrasts sharply with his tremendous external ugliness. He is, in fact, so ugly as to become a caricature (as Martin posits), but such an extreme caricature that it call the reader’s attention to the fact that someone so ugly, so caricaturally ugly, is a good person and a loyal friend; and thus, instead of configuring a racial caricature, the exact opposite is true - the caricatural aspects, denoting difference (even if racial), exagerate said difference, thus stressing the innate goodness of Connie and defeating the racial stereotype Martin purports him to be.

At least that’s the impression I got from reading a single issue and your perceptive analysis.

Well, and if it's true that one image is worth a thousand words, I guess the second panel on page 15 of issue 7, by its utterly unity of feeling and identity of emotional 'crestfallenness', dispells any idea of racial caricature.

But hey, one must never allow reality to intrude upon one's pet political bias.

I definitely agree that Caniff wants the reader to like Connie's good qualities even while laughing at his silly appearance, and this would be pretty much standard with regard to most comic sidekicks. There are probably some out there who are deliberately set up to look stupid and nothing more, but I think they're the exception, not the rule.

I appreciate your eloquent defense of Connie's character, but I'll mention another reason why his loyalty would seem inconsequential to a lot of ideologues: because the idea of a POC being in any way deferential to a white guy (or guys) would nullify his supposed good qualities.

I can understand part of Martin's attitude. It's true that it's evident that a particular racial caricature has been repeatedly used to downgrade the race to which it's been applied, then it should be mentioned that a "problematic racial caricature" is present in an old comic, film, or whatever. But to call Connie a "racist caricature" is inappropriate, because the author is not using the caricature in a racist manner. I would agree that Connie is meant to be an admirable character despite having a silly appearance, and Caniff said the same thing. He did a one-page defense of Connie, showing him responding to his critics verbally while engaged in catching crooks or something like that. I can't remember where the one-page appeared-- it doesn't appear to be online-- but Will Eisner swiped the basic idea for a "defense of Ebony" strip he did in the 1970s or thereafter.

I looked around on the net for explanations as to how the "Asian buckteeth" schtick came about, and found this interesting debate: