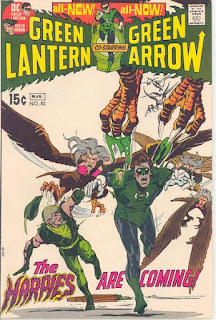 As written by Denny O'Neil and pencilled by Neal Adams, the last fourteen issues of the Silver Age GREEN LANTERN feature-- which changed its masthead title to GREEN LANTERN/ GREEN ARROW during that period-- remains one of the touchstones of the early Bronze Age. I won't attempt to critique the entire rum here, which has both its fans and its detractors. It's enough to say that the revised feature followed the lead of the "relevance craze" in popular fiction of the late 1960s and early 1970s. This meant that the GL/GA stories dealt with social problems in a compartmentalized, one-social-topic-per-story fashion, whether the problem was drugs, Native American problems, censorship, Black American problems, and so on.

I don't know whether or not advance advertising on "Nightmare" positioned the story as an examination of the "problem" of feminist concerns. I recall that at least some of the lettercol mail attacked the story as a travesty of those concerns, but the text of O'Neil's story doesn't foreground the narrative as a "cause of the month." Mythologems about femininity make their appearance in the story, but it's hard to see what value O'Neil meant them to have. Hence, "Nightmare" qualifies not as just a mere bad story, but also an inconsummate one, in terms of its symbolic discourse.

Long before the beginning of the Silver Age, the writers of DC comics became notorious for the use of heavily plotted stories which often depended on the contrivances of villains seeking to trap or hoodwink the stories' heroes. "Nightmare" is first and foremost a "trap" story, beginning with an absurd but eye-catching opening. Green Arrow, somewhat on the outs with his girlfriend Black Canary, decides to buy her a box of roses. He shows up at her house, greets her (in her civilian ID as Dinah Lance), gives her the box-- and out of the box spring a pair of creatures that resemble the harpies of Greek myth. Arrow and Canary try to fight the monsters, then flee the house-- only to find that the harpies disappear a moment or two later. The archer calls on his power-ring partner to help him investigate the attack-- and therein lies the trap. Without dwelling too much on the particulars of the ramshackle plot, Green Lantern's old foe Sinestro and his previously-unseen sister are behind the whole thing: they contrive to menace the Lantern's friends in order to draw him out of hiding, so that they can lay their trap.

It's useless to critique O'Neil's story in terms of verisimilitude-- to object that a villain as resourceful as Sinestro surely could have found a more efficacious way to draw out the Emerald Guardian; one less dependent on anticipating Green Arrow's wooing habits. In all likelihood O'Neil contrived this wild, thoroughly improbable opening primarily to sell the issue to young readers and for no other reason. A secondary benefit is that the flower-store gimmick gives Arrow and Canary something to investigate after the Lantern has been trapped, and the same gimmick makes it possible for them to save their friend after having accidentally put him in danger. But more importantly, such a critique is ultimately irrelevant, since I'm concerning myself not with consistency of character, but the way the symbols are utilized.

The substance of Sinestro's trap is that he tricks an entire civilization-- one made up of the harpies, a group of huge Amazon women, and a ruler who calls herself Medusa-- into doing his dirty work in trying to kill his enemy. Green Lantern, upon encountering these leftovers from the mythic past, gets a quick-and-dirty explanation for their animus toward men. Their entire city was hurled into a dimensional other-world by an ancient wizard, who was pissed because Medusa laughed at his marriage-proposal. Apparently this is the only "feminist" issue in the story-- essentially, that some men do some shitty things to women-- although once or twice Black Canary gives Green Arrow a hard time for his overbearing masculinity. 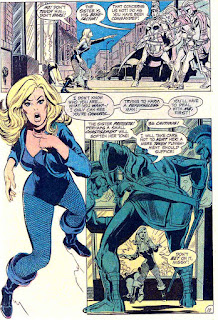 Even for comic books, dumping together harpies, Amazons, and snake-haired Medusa makes for a pretty motley myth-crew (further complicated by Adams dropping the motif of Medusa's scary petrifying face, and instead giving her a headful of snakes that can strangle their victims). I must admit that some mythographers, notably Robert Graves, have argued that the legendary Amazons of Libya worshipped Medusa as a more horrific version of the martial goddess Athena. I suppose it's possible that Denny O'Neil happened across this factoid and wrote it into his story, but I've read many of O'Neil's comics-tales and he doesn't impress me as a mythophile. It could just as easily be true that O'Neil was unaware of the mythographers' connection between Medusa and the Amazons, and that he just associated these figures because in their traditional stories they are opposed to normative Greek patriarchy-- the Amazons, because they maintain a role-reversed female-centric society, and Medusa because she's raped by Poseidon but goes on to menace mortals as a monstrous gorgon. Still, harpies don't really have a place in the equation. They've been variously interpreted as wind spirits and spirits who torment the dead, so they really don't fit in with the theme of women treated badly by patriarchal males. It may be that they're only there because Neal Adams felt like drawing harpies.

O'Neil's script states that Sinestro stumbled across the exiled Amazons by accident, somehow figured out that they were man-haters, and so enlisted his sister, the so-called "Witch Queen" to approach the Amazons. One of the martial maidens sums up their program: "to make all men pay for the crime of the wizard." But, even granting comics' penchant for absurd premises, it's hard to see how Sinestro's sister could convince the Amazons and harpies that any particular man should be pulled into their world and executed, as they attempt to do to Green Lantern.

One fan complained that the O'Neil/Adams story trivialized the subject of feminism by simply using a bunch of female monsters as the hero's adversaries. I might have validated a story that was simply out-and-out gynophobic, like certain EC horror-stories that I'll be addressing in future. But O'Neil and Adams maintain the butt-kicking Black Canary as an icon of formidable femininity, so the creators certainly aren't downgrading women as a whole. Perhaps the key to this awkward, inconsistent tale is that of male melodrama, for when Green Lantern is hauled before Medusa, he's condemned to death simply for "being like he who banished us" Black Canary shows up and talks Medusa out of killing the hero by revealing that they've been manipulated by another man, rather than being helped by a fellow female. So the moral, such as it is, is not to assume that shared sex organs mean shared interests.

It's also interesting that although the Amazons don't like being in the dimensional otherverse, nothing whatever is said in the story's hurry-up-and-finish conclusion about Green Lantern or his fellow superheroes freeing them from their exile. Granted, such a motley crew wouldn't fit in on modern Earth, but it seems like even the narrative's author wanted to get rid of these female foes as soon as he'd conceived them-- an interesting contrast to the more incisive treatment of feminine concerns in the earlier "Star Sapphire" stories in this title.