“For … various offenses Tantalus was punished in Tartarus.   For he was kept perpetually famished and parched, standing chin-deep in water and with laden boughs of fruit just above his head … Alternatively (or additionally) a great stone hung over his head, suspended by a thread, so that he lived in everlasting terror.”—Grant and Hazel, Who’s Who in Classical Mythology, p. 309. 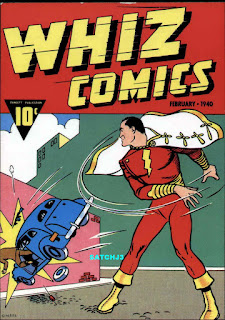 By way of following up on my assertions in STRIP NO-SHOW, I find that the origin story of Fawcett Comics' Captain Marvel provides the best-known example of a comic book story which conjures up a wild set of mythopoeic images to support a fairly simple story.

The earlier success of DC's Superman was the proximate cause for Captain Marvel to come into existence. However, as chronicled in Jim Steranko's HISTORY OF COMICS, writer Bill Parker's original idea was to present a team of characters with powers derived from the Greek gods. Thanks to Superman, this idea was converted into the notion of a single superhuman who could draw on an assortment of powers from mythic personages.  Yet this particular Superman-imitator-- which in its genesis at least, seems mostly the creation of scriptwriter Parker rather than artist C.C. Beck-- ventured more deeply into what I've called "the realm of intuition and its mythic images."

Consider the opening, in which homeless preteen Billy Batson is approached by a dark stranger. 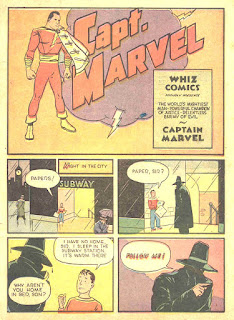 In the hands of most uninspired imitators, the stranger would have quickly doffed his hat and coat and revealed that he was X of the planet Y, and that he planned to give Billy fabulous new powers. Instead, Parker troubles to imply that Billy's descent into the subway is also a descent into a figurative underworld, with a weird subway train taking the place of Charon's boat. Parker's description of the car having headlights "like a dragon's eyes" inevitably suggests that Billy is traveling within an analogue of a living creature. It's significant that one of the figures from whom Billy will derive power, Hercules, survived passing through the belly of a giant beast.

The journey, though short by comparison with Dante's subterranean tour, brings Billy into contact with devil-like figures: the "Seven Deadly Enemies of Man," who are in essence a reshuffling of the Seven Deadly Sins of early Christianity.

Billy then finds himself in the company of the beneficent-looking old wizard, while his shadow-guardian-- possibly patterned on the Greek notion of the *psychopompos*-- simply isn't around any more. The old wizard Shazam shows Billy the personages from his name is derived, and then informs the boy that he knows how the boy was flung out into the cruel elements by his nasty uncle following the death of his parents. 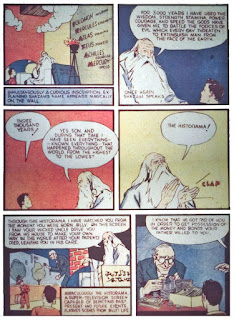 Immediately following the scene of the evil uncle counting his ill-gotten gains, the story reveals that Shazam is standing under a stone block, suspended by a thread close to breaking. Shazam's only explanation of this extraordinary circumstance is to say that his time  is almost up, which is the reason he's summoned Billy to his domain, so that Billy will take Shazam's place as a fighter against evil-- in essence, replacing Shazam as the younger generation inevitably replaces the older. By pronouncing the wizard's name, Billy can become Captain Marvel: 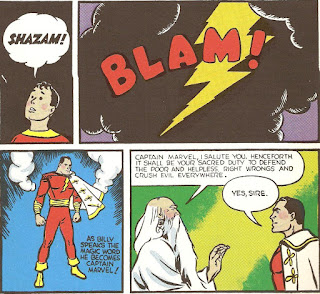 After a quick demonstration that this transformation is reversible, the wizard asks Billy to transform into Captain Marvel a second time-- and just as the youngster does so, the stone block drops down. Shazam's implicit death is concealed by decorous thunderclouds. In addition, as soon as Shazam dies, Billy finds himself back on the city-street, where he remarks that his experience seems like a dream.
However, by the end of the story, Billy finds that he can bring the power of Captain Marvel into the real world as well. 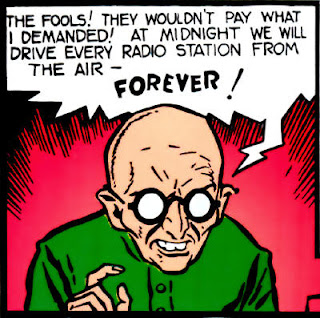 Not only does Billy use his new power to thwart the designs of the mad scientist Sivana-- who bears a slight resemblance to Billy's evil uncle-- the hero's altruism is rewarded when he's given a job as a radio-reporter, a job which to my knowledge the character keeps for the entirety of the feature's run. It's interesting that though the main narrative function of Billy's job is the same as that of Clark Kent, being a means of keeping the hero on the scene for various troubles-- it also alleviates the boy's poverty-stricken condition. In essence, the much later origin of Spider-Man recapitulates the same pattern, in which the path of heroic altruism also rewards the hero with a source of remuneration for his efforts. Unlike Captain Marvel, Spider-Man even contemplates finding a job that will pay him for his exploits, but that somewhat non-heroic notion was quickly squelched.

I haven't come close to reading all of the fantasy-oriented comic strips of the early 20th century, but I have sampled most of them, and I've not come close to finding any strip-- "Little Nemo," "Popeye," or the overrated "Krazy Kat"-- that displays this density of mythopoeic images for a given sequence.
Admittedly, those three strips are probably on the whole better than Captain Marvel in a formal artistic sense. But by my lights none of these three really commit to their fantastic concepts in a manner that Parker and Beck do here.

Further, though most stories headed by either the Captain or his "Marvel Family" relations are not this dense in their imagery, there always seems to be a total commitment to whatever fantastic entities, events or objects come into the heroes' purview. This may have been the key to the long success of the Fawcett "Marvel Family" line. If so, it was a strategy that DC's Superman titles did not manage to pursue with any regular success, as noted in this essay on the Weisinger-era titles. Though Fawcett closed its doors in 1953, it seems it took roughly five years for the DC editor to feel that he had the freedom to bite the Fawcett style.

Posted by Gene Phillips at 5:35 PM