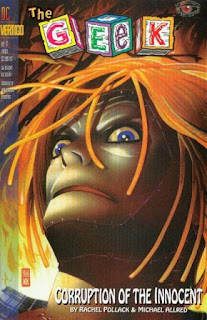 Two notes to start. First, I’ve used the cover-title “Corruption of the Innocent”to denote the story of GEEK #1, because the title on the credits-page inside, “Homelands of the Dolls” is markedly inferior and not representative of the mythcomic’s theme. Second, when speaking of authorship I choose to  emphasize Rachel Pollack since the narrative seems more typical of her creative tendencies than those of artist Michael Allred—though of course I have no personal knowledge as to who contributed what precise elements.

Neither the original BROTHER POWER comic nor Neil Gaiman’s mini-revival of the character were that notable, mythically or otherwise. Thus it’s a small miracle that “Corruption”—apparently never intended to be anything but a one-shot—is as good as it is. And given that Pollack emphasized transgender concerns in her DOOM PATROL work, I think it likely that she originated the core symbolism of this work.

As noted in my review of SWAMP THING ANNUAL #5, writer Neil Gaiman simply tosses out the notion of “doll elementals” without any elaborations. In essence, he was reinventing Joe Simon’s Brother Power along the same lines that Alan Moore reinvented the Wein-Wrightson Swamp Thing: giving a character with a minimal origin-story a connection to deeper mystical forces. In the case of Swamp Thing, these forces became a part of the firmament of the DC Universe. It’s probably just as well that the “doll world” of Gaiman never became a regular feature of that universe, but it works quite well as a one-off concept, sort of DC’s version of the “Isle of Misfit Toys.”

Here as in certain other reviews in this series, the plot proves secondary to a series of symbolic encounters between the main character and his opponents. In this case, the naive living dummy Brother Power endures a series of ordeals by his chief enemy, Doctor Abuse. Brother Power, as in his earlier appearances, possesses a set of bizarre powers but has no aggressive will and usually seeks to flee rather than fight. In a manner analogous to the way Power’s old hippie-friends sought to run the dummy for president, Doctor Abuse stage-manages the dummy to become (a) a literal carnival-geek, (b) a corrupt businessman versed in junk bonds and insider trading, and (c) a modern member of the American Nazi Party. Invariably someone addresses Power as a “geek,” which enrages him, though not enough to incite him to real violence. In most of these situations, Simon’s original epithet  “freak” might have been more appropriate, though there’s something to be said for seeing a DC Comics character enact the traditional act of the carnival-geek: that of biting off a chicken’s head.

Though Brother Power has the general appearance of a man, only Doctor Abuse possesses the will to aggression so dominantly associated with the male of the species. In fact, good and evil here are fairly well divided in terms of gender, for on the opposing side battling for Power’s soul is his sole female friend, Cindy. Though she was an idealistic hippie twenty years previous, in the intervening years Cindy became a prostitute, wise in the ways of exploitative males. At the same time, she participates in a women’s goddess-worship ritual designed to sanctify her femininity, with a group that goes by the ironic name “PMS” (for “Pack Menstrual Savages.”) She’s also aware that Doctor Abuse has been stalking her for some time, though when the villain’s plot is revealed, it appears that he’s been keeping watch on her purely for the purpose of using her against Brother Power—which isn’t possible until the Geek returns to Earth.

Pollack expands on Gaiman’s sketch of a “doll elemental world” by picturing a cosmos in which various manikin-like beings exist, most of which look like commercial creations: a Barbie, an action-figure, a trio of chocolate animals. In one panel, however, Pollack and Allred include what looks like a shamanistic painting, which by itself suggests a deeper symbolism: that of seeing dolls as magical representations of human beings.

Pollack’s scenario never comes back to the shaman, but she includes a fascinating leitmotif throughout the narrative: that of dolls being hung from trees and set on fire. Pollack does not explain the motif but it may be a reference to European “poppet magic,” in which witches cast spells upon dolls meant to be represent human subjects, and then completed the magic by hanging the poppets from tree-branches and setting the dolls on fire. It’s a motif in no way beholden to anything in either Gaiman’s “Brother Power” revival or in the companion tale “Shaggy God Stories,” though Gaiman does make reference to two famous figures, Odin and Christ, who hung aloft, respectively on a tree and on a tree-like structure.

Another possible influence is that Pollack, in addition to emulating the general scheme of the Alan Moore Parliament-of-Trees Project, may have borrowed the Eden-myth of "two trees" from Gaiman's "Shaggy God Stories," though with substantial alterations if so. The narratives asserts the “doll world” is centered upon a “tree of innocence.” In some long-gone era the tree “fell asleep” and inadvertently spawned a shadow-version of itself, a “tree of corruption.” This setup resembles a number of archaic myths that pair up a spirit of goodness with a dark sibling. But the idea that the “tree of innocence” creates dolls as vessels of purity and innocence is as close to being original as any mythic idea can be. In any case, once this cosmic scenario has been spun, the reader finally learns the villain’s plot. Doctor Abuse has been flinging temptations into Brother Power’s path in order to use him for an act of sympathetic magic, aimed at destroying the Tree of Innocence.

Despite the dummy’s general passivity, he does manage a good trick in the end, hoaxing the evildoer and calling upon the power of femininity to overthrow an evil that seems dominantly masculine. The story ends with a happy if quixotic ending. After Abuse has been deceived and perhaps defeated, Cindy is finally re-united with her life-size doll-man. The story ends with the image of her embracing the limp Brother Power as she exclaims, “I’m your friend forever!” There’s a minor mythic motif here as well, in that even today little girls are better known than little boys for bonding with dolls. It might be argued that Pollack’s Cindy embracing a world of “innocence” that shields her from the “corruption” implicit in adult sexuality. Happily, Pollack does not overplay the allegorical possibilities of the story, and so the short saga of Brother Power the Geek comes to an emotionally satisfying conclusion, which as of this writing no later writers have mucked up.
Posted by Gene Phillips at 2:19 PM