THE LINE BETWEEN '"FAIR' AND "GOOD" PART II

In Part 1 I proposed that the narrative element that most made the difference between works of "fair mythicity" and "good mythicity" was that the latter sustained more of a "unity of action," so for Part 2, I decided to provide some examples based largely upon the work of one artist, Jack Kirby, either by himself or in collaborations.

To this date one of my preferred examples for an inconsummate null-myth is the debut tale of the Jack Kirby/Dave Wood collaboration, "The Sorcerer's Box" from 1957's SHOWCASE #6. I won't repeat the arguments presented here as to why the Kirby/Wood story proved inconsummate, but here's the closest I found to a "theme statement" for the story, which in turn would have provided it with any unity of action:

....the "villain" of the story, whose name so obviously references "Merlin," is a rather half-assed version of the Faustian over-reacher.  I noted earlier that the story does touch upon the nature of masculinity, and it does, in the sense of evoking pleasure in the heroic acts of the Challengers.  But the story doesn't work well as far as positing Morelian as the obverse of the heroes, simply because he pays them to do a dangerous job.  Is Morelian in some sense "anti-masculine" for having done so?  This is a possibility, but Kirby's story (and Dave Wood's dialogue) offer little to explain why the heroes suddenly take a dislike to Morelian at the end. 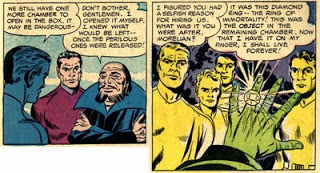 Boiled down, the potential underthought-- for Kirby and Wood probably would never have become didactic enough to produce a complementary overthought-- might read something like, "The ways of manly daredevils are better than the ways of unmanly mystics." The story doesn't succeed in evoking even that simple a theme statement, though as I pointed out in the essay, Kirby had probably completed more unitary works prior to his CHALLENGERS outings.

Now, I did not label this THOR story a "near-myth" when I examined it in COMBAT PLAY PT. 2, but it does attain a clearer theme statement than the CHALLENGERS story, even though the Lee/Kirby collaboration is no more truly didactic in its main purpose.

What does keep #152 from being just another big battle-tale, though, is that Thor and Ulik are arranged to represent philosophical postures. Thor, son of Odin and scion of Asgard, is heir to a philosophy of noblesse oblige, while Ulik describes himself as "lowly-born-- with naught to lose-- and a world to gain." 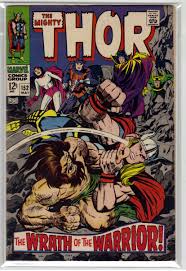 Though the sociological myth here is much clearer and more deeply resonant, though, it's still just what I've called a "myth-kernel" in the midst of a "very rambling arc" that involved, not just Thor and Ulik, but also Balder, the Norn Queen, Loki, and various other Asgardian personnel, all with arcs that don't complement one another. So it's a near-myth possessed of only "fair" mythicity. It's sort of like a disorganized essay with a strong theme statement, while the CHALLENGERS story is disorganized all the way through.

Sociological myth once more takes the fore in another Lee/Kirby collaboration, this one from a few years previous to the Thor tale. The FANTASTIC FOUR tale titled "The Red Ghost" is included as one of my mythcomics,which should suggest to readers that I give it at least some level of good mythicity. My current line of thought about the necessity of a "unity of action" within the story, which in turn supports the creators' symbolic discourse, is borne out by my observations about the balance between what could have been flat elements in a purely didactic argument:

...in contrast to other, less complex allegories-- whether from Marvel Comics or elsewhere-- Lee and Kirby devote an inordinate amount of effort to contrast the exemplary behavior of the four American heroes versus the selfish and controlling behavior of Ivan Kragoff.  This elevates the argument beyond merely "good democracy vs. evil Communism," for it speaks to what is good in humankind generally as well as to what is evil in humankind generally.  I note, just for one possible example, a scene in which Reed announces his plan to fly to the moon alone.  His comrades set him straight with a little horseplay, which nevertheless underscores that though Reed Richards leads the group, he does so with "the consent of the governed." 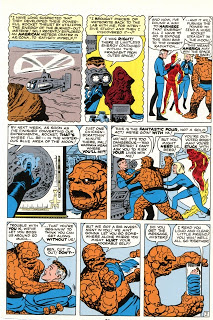 At the same time, I'm moved to ask whether or not this "unity of action" can also apply to longer works. I find that one of Kirby's solo achievements, the original NEW GODS epic, resonates with Aristotle's pronouncement that Homer had managed to provide unity to THE ILIAD by focusing upon "the anger of Achilles," no matter how many other separate war-related plot-lines might have spun off from that. 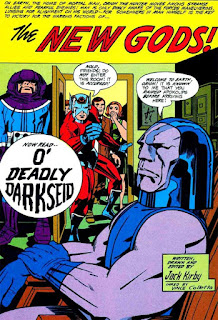 Kirby's abbreviated epic, reviewed here, garnered some complaints for having gone in too many directions at once, but despite some admitted flaws, the artist does always keep a unity of action in the NEW GODS comic proper. Whatever particular plot Kirby might have followed in a given issue, the concern of the title was always about the relationship of heroic Orion to his devious father Darkseid-- a relationship that Orion only suspects at the start, and which reaches a thematic culmination in the 1984 graphic novel THE HUNGER DOGS.

I concluded Part 1 with this hypothesis:

I may use this line of thought to a lead-in to another question, regarding whether it's most beneficial to have a "unity" of idea between a work's overthought and underthought, or whether the two exist on essentially separate but intersecting mental planes, not unlike the interdependence of harmony and melody in music.


I think at least the two examples of "good" mythicity in this essay demonstrate that the mythopoeic underthought does intersect with the more didactic overthought: that the former supports the latter but that neither is defined by the other.

Posted by Gene Phillips at 3:59 PM