I became re-acquainted with this old Gary Groth quote when I re-read my early essay POMO AND PLURALISM:


Not long after, in my ceaseless quest to the Heart of the Collective Myth-Conscious, I happened to reread Fantagraphics' 1997 collection of what I assume to be all of the extant TRASHMAN stories of the late underground cartoonist Spain Rodriguez. I had read the collection years ago, and frankly didn't remember much about it, aside from the mildly enjoyable woodcut-like art-style and a lot of maundering Marxist politics. 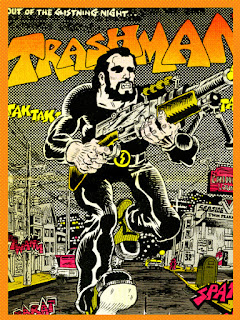 But, upon re-reading the collection with an eye to seeing anything of symbolic depth-- wow, talk about something that has no "artistic significance" and is only relevant for "social interest!"

The TRASHMAN stories are little more than "men's adventure fiction" comics given a smattering of Marxist rhetoric about opposing oppression. Trashman, a revolutionary with a big gun and some inconsistent super-powers, fights the good fight against a vague assortment of bad guys who are supposed to represent the American political hierarchy. The first stories came out in 1968 and predicted a total social breakdown in the latter half of the 20th century, which allowed Trashman to motor around to different enclaves of tyranny and kick a lot of ass.

All of which would be fine, except that Trashman's adventures lack even the rudimentary imagination of the lesser kids' comics of the time. Trashman's opponents are largely faceless bureaucrats, whom readers of the 1960s and 1970s would see as representatives of "The Man." But Rodriguez shows no awareness of why these villains perpetrate their evil deeds-- including a little cannibalism-- except insofar as they are villains. Frankly, Mickey Spillane invested even his dime-a-dozen killers with more conviction.

There are brief touches of insight. In one story, two of Trashman's rebel-colleagues continuously insult each other in racial terms, but by story's end it's obvious that both of them are just using race to rag on each other, in typical "guy" fashion. In another tale, even more "socially significant" though no more "artistic," Trashman and another colleague are taken prisoner by a gang of female rebels: "Nasty Elaine and her She-Devils." This was at least not your typical guy-on-guy battle, though I've the impression that men's adventure mags frequently featured heroes getting captured by modern-day Amazons and the like.

It's a shame, because the minimalist design of Trashman bears some comparison with that of Gould's Dick Tracy, and it would have been interesting to see Gould's conservatism inverted by a charismatic "hero of the masses." But there's no flash in this trash, man.
Posted by Gene Phillips at 5:31 PM