Last month Flo Steinberg passed away, and as I read the obits, I was surprised to learn that she'd had a very brief career in underground publishing once she left her job with Marvel. For over twenty years I'd owned a copy of her one-shot, BIG APPLE COMIX, and I was more than a little familiar with all of the artist-contributors, such as Neal Adams, Archie Goodwin, and Wally Wood. However, I'd never troubled to look at the magazine's indicia, where Steinberg's name was clearly displayed. 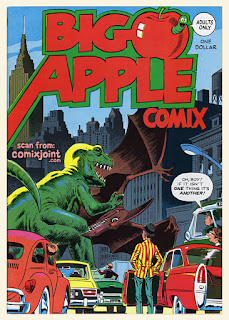 I've not come across any online recollections as to how the project came about, but it's likely that it was done by a bunch of artists who knew one another. The idea shows a "let's put on a show" mentality, as opposed to the demands of working for the Big Two. Steinberg, who had observed Marvel's production methods during her tenure at the company, possibly volunteered her services in that regard, with added help from both Linda Fite and John Verpoorten.

BIG APPLE was, even by 1975 standards, not an especially marketable idea, given that all of its contributions shared one  theme: life in New York City, "the Big Apple." The stories in BIG APPLE run the gamut of underground humor from farce to satire, but only one tale, Wally Wood's "My Word," uses layered symbolic imagery to create a demonic vision of the city. In addition, the three-page story recapitulates. in ironic form, some of the visual setups found in a longer Wood presentation, "My World," published in WEIRD SCIENCE #22 (1953). Scripted by Al Feldstein, the earlier sequence was not really a story as such, but more of an adoring meditation on the wonder-inducing tropes of science fiction. On the last page, the narrator speaks of his world as being "what I choose to make it," and in the last panel he reveals himself to be Wood poised over his drawing-board, identifying himself as "a science fiction artist."

"My Word," however, depicts a world over which the artist has no control, except in the sense that he can exaggerate the already dire reputation of New York City in the 1970s. In the far left of the splash panel, for example, one sees not only a demented version of Batman's villain The Penguin exposing himself to a little girl, while the Shadow stands to one side, apparently willing to let the Penguin do as he wants since the two of them belong to the Cyrano de Bergerac "huge schnozz" club. 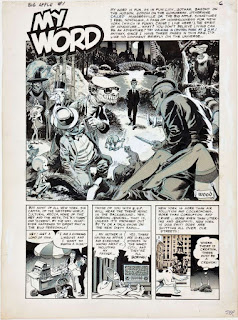 But "My Word" is more than a few MAD-style in-jokes; it's a vision of a "sin city" in which sin has lost its ability to titillate. Wood calls New York many things-- "Bagdad on the Hudson," "Sodom on the Gomorrah,"  and "sin capital of the Western world." But by the third panel one of his character's remarks-- playing on the opening of the 1960-63 teleseries THE NAKED CITY-- that "there are ten million stories in the Naked City, and they're all BORING." The artist follows this up with a parody of the religious homily "where there is creation, there must be a creator" by attributing the thought to a pile of dogshit, recently "created" by a passing canine.

For the remainder of the piece, nameless characters are seen gratifying themselves in one way or another, always with the implication that sexual congress is barely distinguishable from any other form of mundane activity. Page two shows a couple locked in copulation, but the woman's also reading a book while the man's reading his newspaper.

"You must love yourself before you can love anyone else, but how many people really can?" This pessimistic appraisal is immediately followed by the old joke about the guy trying to give himself oral sex, but even in the context of satire, the narrator's line suggests that he finds himself not much less tedious than the quotidian nature of New York City, where getting mugged is the most exciting experience one can have. Most fascinating is the image in the fifth panel of Page 3: 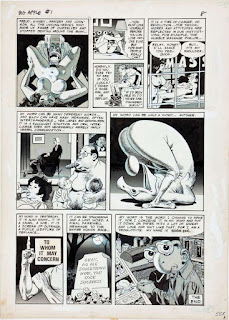 Here, amid many other images of soul-dead sex, Wood gives the reader the ultimate recursive fantasy: a bird-like humanoid laying an egg which the creature drops into its own mouth, presumably to be devoured. (Despite this and a couple of other fantasy-images, the dominant phenomenality of the vignette is naturalistic in tone.) The main point of burlesquing the "My World" vignette seems to provide a reversal of the earlier work's boundless enthusiasm for wonder-producing tropes, one in which both professional comics-artists and their fans have no more immunity to the soul-killing influence of modern life than any other modern-day persons, whether they reside in New York City or not.

I mentioned that this is a vignette, but it does, like the examples of short mythcomics covered here and here, possess a clear progression of ideas that roughly parallel a normal-length story's "beginning, middle, and end." And of course, it is an irony in terms of its mythos, one far more acidulous than Wood's ambivalent KING OF THE WORLD.

Posted by Gene Phillips at 4:42 PM