The 1989-92 run of THE SHADOW STRIKES only lasted 31 issues, and so was probably not judged a great success at the time. The title doesn't seem to have many fans today, and there may not be much support for my championing of the (mostly) stand-alone story of issue #24, "Margo's Story."  Back in the day the tale created a slight rumpus in its day for positing that Margo Lane-- a support-character from the pulp-series who assumed iconic status in the radio show-- was actually not a purely Caucasian character, like most of the series' regulars, but a half-black who happened to favor her white father.

I can't assess the racial politics of either the SHADOW pulp or the radio series. A 1934 Walter Gibson story introduces Jericho Druke, an Afro-American agent of the mysterious hero,. so the pulp did have at least one positive image of a person of color. Still, neither the pulp nor the radio show were set up to critique society in any fashion.

Gerald Jones not infrequently addressed topics of race in his comics-work, not always with complete success. However, "Margo's Story" is one of his better attempts. I said that "Story" is largely stand-alone, by which I mean that it takes place in the context of a larger ongoing storyline, though one need not read the encompassing issues to understand the tale. 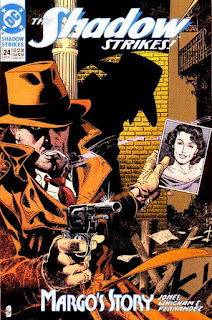 At the start of the narrative, Harry Vincent-- one of the pulp-serial's most-used viewpoint characters-- has fallen out of favor with his shadowy boss. The hero's perpetual enemy Shiwan Khan kidnapped Margo Lane in the previous issue, and Vincent denounced his "chief" for letting it happen. The Shadow's response is to exile Vincent from his network, so that none of Vincent's old comrades will speak with him. Yet at the story's outset, Vincent feels somewhat less than liberated. He remembers how the hero saved Vincent from taking his own life, and he describes the life of obedient service he pursued to his master's uncompromising crusade for justice. But when he speaks of breaking free of the Shadow, he imagines that "I'm dead again." 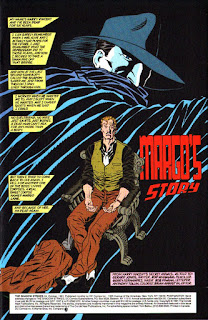 Unable to do anything about the kidnapping of Margo-- with whom Vincent is half-in-love-- he chooses to investigate who Margo was before she became an aide to the Shadow, as if finding her identity will shore up his own. Ultimately Vincent's quest leads to Harlem, and a new version of Jericho Druke. 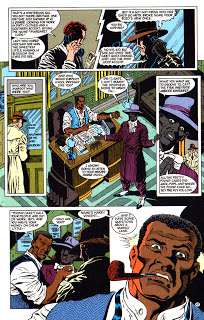 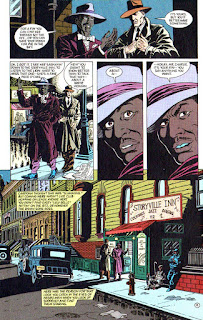 Druke, being a Shadow agent, also refuses to speak to Vincent, but by chance the detective gets new information from one of Druke's clients.

Vincent, in the tradition of most hard-boiled detectives, doesn't so much trace down clues as blunder from one milieu to another-- in this case, journeying from Harlem to New Orleans. Clearly Jones chose these two milieus to be complementary images of the Black Experience in the United States, and Jones tries his best to capture that elusive experience in his own terms:

.. he led me-- slowly-- at the pace of the city. Away from the breezes of the river and the fanned air pouring out of the tourist joints, where the air was like hot jello you had to swim through. I thought I knew what "muggy" meant fro, New York, just like I thought I knew what a Negro neighborhood was like from Harlem.

Does white writer Jones capture "the Black Experience?" Maybe not, but as far as melding the generally apolitical "Shadow" mythos with a more politicized understanding of the American underclass, Jones does a better than average job. I appreciate that he makes Vincent a man of his time. He doesn't become enraged at the revelation of white men's injustice, but it moves him because it's something that simply never impacted on his world before. He's shocked to learn that Margo, his possible inamorata, is actually half-black, and he doesn't immediately think that it doesn't matter, though it does explain for him a lot of mysterious aspects of Margo's life, particularly when he converses with Margo's long-unseen mother. 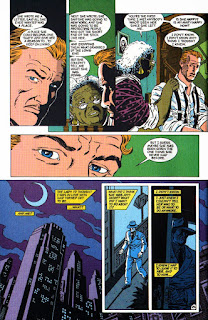 Further, Jones manages to make the fantasy of the Shadow's organization relevant to the political realities, for Vincent concludes that her experience of racial injustice is precisely the thing that makes her join the ranks of the Shadow. And by the story's end, "dead man Vincent" finds that he can only find his own resurrection by joining the ranks of the faithful once more.
Posted by Gene Phillips at 5:46 PM