Hawkman, one of DC's most iconic but never very popular characters, didn't get an immediate reboot after the 1986 Crisis. For a couple of years, a character resembling the Silver Age "Katar Hol" hung around in the Justice League. But when DC green-lighted Timothy Truman's HAWKWORLD, that character had to be explained away by the usual retconning. 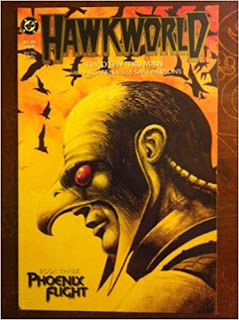 The three-issue "prestige format" HAWKWORLD recasts the Silver Age origin from 1962 into the "grim and gritty" mood of the 1980s. Nevertheless, Timothy Truman, both writer and penciller on the project, naturally does not pursue Gardner Fox's notion that Thanagar, homeworld to the characters who will become Hawkman and Hawkgirl, is a pre-lapsarian world without crime or evil. (The Manhawks, who brought about the rise of crime on the planet in Fox's tale, make a minor appearance in Truman's project.) Instead, Thanagar is a space-opera version of a colonial empire. Admittedly, there's a historical backstory in which Thanagar itself suffered an invasion by another extraterrestrial power, which led the Thanagarians to become a bellicose, all-conquering space-power. Truman doesn't devote a lot of space to the process by which Thanagarian cops, called "Wingmen," began using winged outfits to fight crime, but the re-visioning of Thanagar as a warrior culture gives greater logic to the new Hawkman's tendency to utilize a variety of weapons.

This Katar Hol is first seen as a low-ranking Wingman, under the command of a corrupt superior named Byth (who, in the Silver Age, is the villain that the Hawk-heroes encounter in their first appearance). Katar has chosen the life of the policeman out of an idealistic outlook uncommon in his society. However, he soon finds out how his people have degraded all of the alien peoples they've conquered-- many of whom dwell in the "Downside," the literal "underworld" of the cities, while the Thanagarians dwell in comfort in the high towers of the city. 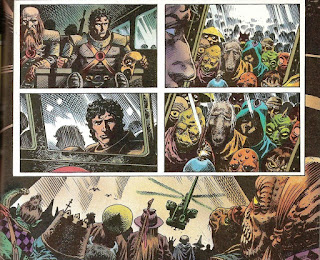 Katar's low rank in the police force doesn't mirror his social status. His father Paran, a famed inventor, belongs to the aristocracy. At one party, wherein non-human beings are relegated to the servant class, he meets a beautiful woman named Shayera, and the two of them hit it off somewhat. However, in time he learns that she's just a pampered child of privilege, making one wonder how she's going to progress to become Katar's crimefighting partner.

Katar's attempt to walk the straight and narrow is doomed to failure. First, Shayera is killed by a bomb set by alien terrorists. Katar goes after the killers, only to find that one of their allies is his own father Paran, seeking to rectify the injustices of his people.

Katar's superior Byth uses the death of Paran to implicate Katar in an arms-smuggling ring, and to condemn Katar to exile on a barren isle. Over the years Katar becomes obsessed with escaping with some sort of artificial wings. Then he finds one of the isle's other inhabitants making just such a pair of wings, and, reverting to Thanagarian type, Katar kills him. 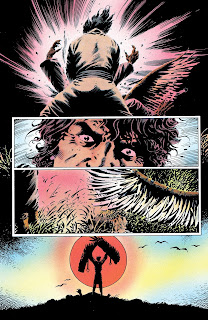 To the hero's shock, he learns-- from R'd Nar, the brother of the man Katar slew-- that the wings were always meant for Katar. Further, R'd Nar becomes Katar's Yoda, teaching the future hero to become more centered. However, Katar never uses the wings to escape the island, for Thanagarian authorities decide to release Katar after his ten-year confinement. Once Katar's back in civilization, he promptly deserts his old life and joins the "Downside," where he takes up his father's cause of helping the downtrodden. He also meets a female "wingman," and eventually learns that not only is her name also Shayera, but that she is the adopted daughter of the original Shayera's father. One might almost call her "Shayera 2.0," given that the original is corrupt and so must be replaced by a character more like the Shayera of the Silver Age. 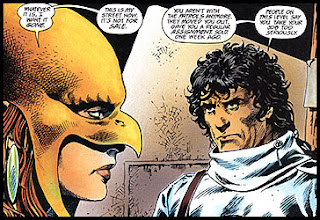 Katar and Shayera bond over investigating the criminal activities of Byth, who, despite being part of the power structure, has decided to make money on the side by running guns. 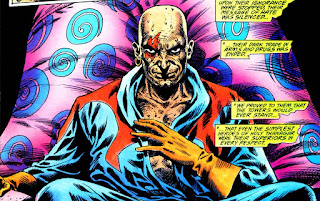 The original Byth of the Silver Age was a shapechanger, and Truman works in that aspect as well, making the corrupt cop a user of a shape-changing drug. Katar and Shayera expose his machinations, but Byth escapes the planet and heads for a certain obscure planet, way outside the Thanagarian empire. At this point HAWKWORLD concludes, in order to give the future Hawkman and Hawkgirl a motive for moving their operations to Earth.

The series, with which Truman had limited involvement, lasted only 33 issues and was thus not a success. However, even though Truman doesn't develop the full potential of his Thanagar as well as he might-- for instance, he touches on avian evolution but does not make this relevant to his entire story-- the original HAWKWORLD is certainly one of the more substantial reboots of the "grim and gritty" era.

Posted by Gene Phillips at 5:36 PM