Mike Baron's long-running feature, THE BADGER, always showed a high level of inventiveness, for all that most critics of the 80s and 90s tended to ignore it. Possibly Baron's conservative politics played into that indifference, though it's more likely that most critics didn't like the author's unapologetic paeans to popular culture. 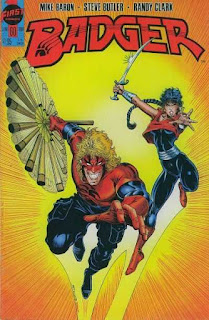 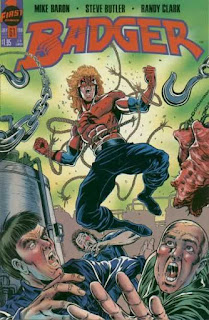 The Badger's battle with these malcontents leads him to a plot to sacrifice a great steer to a demon named Motorhead, patron of monster trucks. So the hero's wizard-buddy conjures up a rival demon, Ratfinque (that's the "Big Daddy" homage), who is the patron of hot cars. I can't say that Baron's admixtures of pop-culture icons works well enough to attain a high mythicity, but it's worth celebrating just for associating the comic violence of the Stooges with the extravagant mayhem of martial arts films.

I'll note in passing that although BADGER may've enjoyed its longevity thanks to its adventure-elements, but fundamentally, I think it's dominantly a comedy, not unlike Rumiko Takahashi's RANMA 1/2, whose combination of adventure and comedy elements I discussed here.
Posted by Gene Phillips at 4:11 PM